The 3D model for the Z motor bracket seems like it might be wrong. When viewed from side, the motor shaft does not line up with the screw. 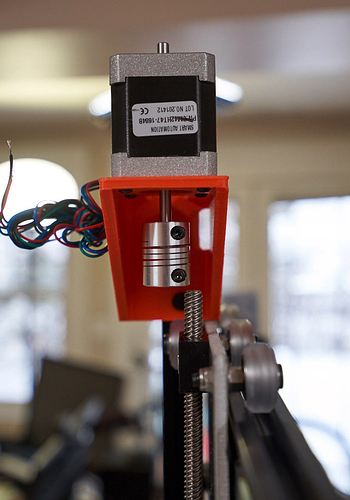 It seems like the offset for the mounting tab on the back got mirrored the wrong way when making the model. If I take the part and mount it upside down, so from the back it looks like. 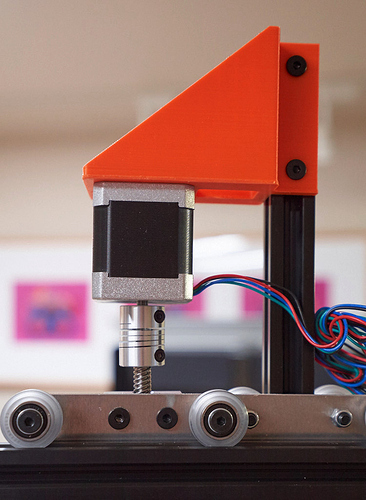 Then the shaft lines up as shown in next photo. 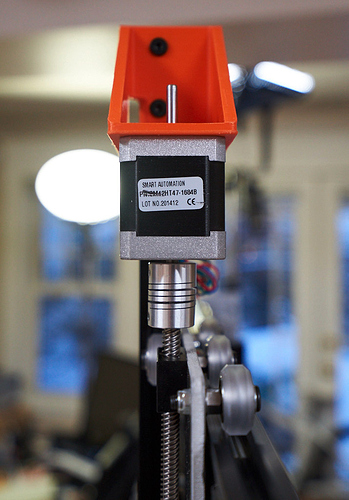 Am I mounting something totally wrong? or some other stupid mistake? or is there an actual problem with the 3d model file here?

Well as so as I posted this, it occurred to me what the problem might be so I think this is solved. It looks like the cross slide plate had the wrong orientation which caused this problem.

Thank you very much for the pictures you posted - they are very helpful!

I was able to export most of the 3D parts from OnShape into an STL format… but for some of them I am having trouble understanding what part of the drawing is made out of plastic material or or it’s made out of metal. These parts are mixed with all sorts of other components which makes it impossible for me to distinguish plastic from metal.

Do you happen to have a copy of the following components in 3D format?

I don’t know how many hours I spent staring at those components - it would be really helpful if someone can post pictures of them.

I tried to export the files from OnShape, and this time I noticed in the left-hand panel of their interface I can see the description of all objects that are part of the soil sensor - that does help to identify the parts.

I am still confused though… the exported file seems to be missing objects that are visible on OnShape but are not visible in the exported 3D file.

For example I can see spikes and a blade being part of the Weeder but they are not in the exported STL file. 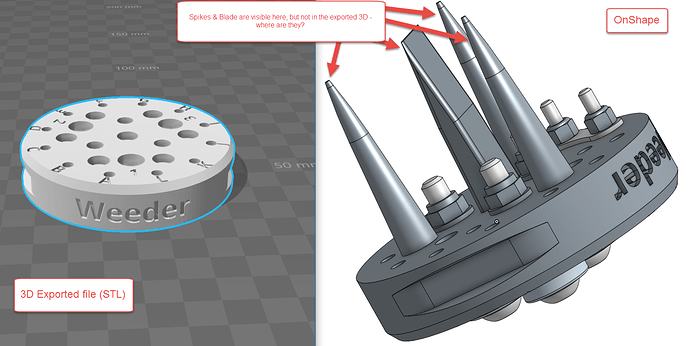 What are the spikes & blade made from? Is that a separate part that needs to be purchased from somewhere else?

For v1.1 parts, there’s an assembly in the OnShape document called All Plastic 3D Print Parts (for STL export) (located in the “Meta” folder). Also, the Bill of Materials for the 3D Prints has images of each part.

As for the v1.2 weeder, you show an image of the weeder assembly. The v1.2 weeder is comprised of separate parts: the base and the implements (spikes and blades). If you navigate to the weeder part studio, you can export all the parts shown there. Keep in mind that v1.1 is the most recent stable version.

@peters you are getting a little off-topic for this thread though. Next time please consider starting a new topic so that others may find the information more easily. (Forum FAQ - Keep it Tidy)