Question about negative coordinates only setting

I have a question about the toggle switch, specifically the Z axis.

Is there a way to let the farmbot make both + and - coordinate moves without having to manually toggle the switch when making say, positive movements.

Example: I’m trying to get my farmbot “put tool away” sequence finished and noticed that my farmbot won’t adjust +5 down so that it slides in perfectly and without catching. After noticing that it wasn’t correcting +5, I realized that its because the “negative coordinates only” switch was toggled, so it completely ignores the +5 movement.

Is there anything I can do so that my full “plant seed” sequence will plant the seed and then put the tool away and set itself to the home position?

I’ve been having some issues with - and + movement with my farmbot.

I first contacted @RickCarlino about the problem and was informed I should let you guys know just in case this might be a firmware issue.

Did you try toggling the negatives only toggle?
Yes, I’ve toggled the switch before. it seems not to make a difference. As long as the allow negatives only switch is on I cannot make + movements at all. The farmbot will only go as low as its 0-Axis will allow and nothing past that.

Here is a screen shot of the sequence. the 4MM Z axis move is the issue here. it will not drop lower past 0. 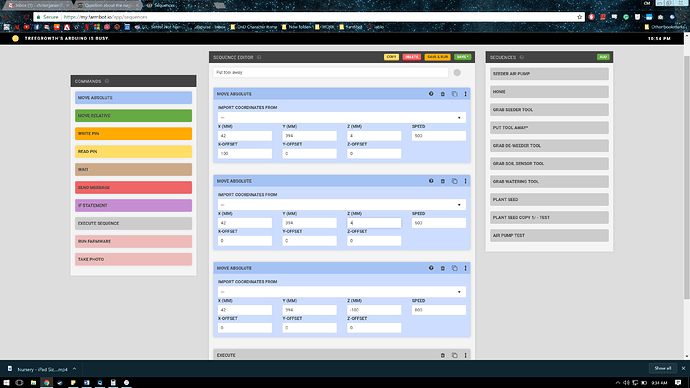 _
Move to the specified location (x42,y394, Z0) with a 100MM X axis offset with a 4MM Z axis adjustment to align the tool head to the tool tray for smooth entry.
Slide tool head into tool tray bay and then move -100MM upward to disconnect the magnetic connection and then set itself to 0,0,0.

Move to the specified location (x42,y394, Z0) with a 100MM X axis offset. Does not complete the 4MM adjustment - says the movement is incomplete. (this is where the allow negative coordinates only" switch is prohibiting this adjustment.)
Tries to slide tool head into tool bay - gets caught - tries to complete rest of movement. says movement was complete. (even though it was stuck and never physically made the movement.)
Raise Z axis -100MM up to disconnect tool head from tool mount. reset itself back to 0,0,0 position.

The negative only switch is meant to be used where the home position is at step zero and a physical barrier. The machine is supposed to find the home position at 0 mm by hitting the end stop or something blocking movement detected by encoder.

If you are at step 0, going up 4 mm should not be possible.

For testing purposes however, the release that is cooked up at this minute will have an option where the bot does not stop at zero but just continues.That will have some issues with slow speeds when crossing the 0 for now, because the system was made for running along one side of the axis, not both sides.

We recently released an update to the OS and the web app with software Software Limits toggles to disable stopping at home. As Tim has mentioned, the zero position (home) should be at the end of an axis, so for general use the device should not be moving past zero.

The latest FarmBot OS image can be downloaded here, with new features available at my.farmbot.io.