I put my FatmBot away for the winter. Shortly before the season ended last year I had some connectivity issues but decided to figure it out this year. So here we are.

I hooked up my farmbot and downloaded and installed the newest OS. It connected to the network but won’t connect to the raspberry pi.

@FranktheTank I took a look at your device remotely. Your firmware controller is set to ttyACM0, but no such device can be found- are you sure that the Farmduino is physically plugged into the Raspberry Pi? 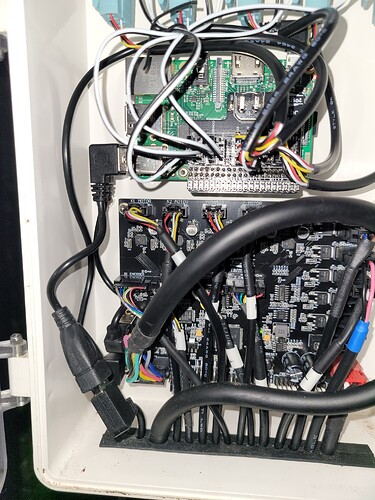 So I looked at all the connections and actually reconnected them just to make sure. Seems like everything is connected correctly.

One other thing I noticed is the red light in the upper right corner is flashing, not solid like I believe it should be.

@FranktheTank OK, the Farmduino is visible now. There is still no GCode coming from the Farmduino, though. Your camera is taking photos fine, which makes me less suspicious of a voltage issue (usually when there are power issues at play, the camera stops working).

Here are some other things we can try:

You got it man! I yanked the one from my printer and it connected. So I’m on the hunt for a new cable now. Thanks for your help!

As a side note, if you are based out of the US, you can find replacement connectors on Amazon for a few bucks, but make sure the cable bends in the correct direction! I once bought a cable that bent 90 degrees to the right and was not usable in the electronics box because of how things fit- just a heads up for anyone finding this thread via search.