I’m only wanting farmbot_os to not crash when a Sense HAT is attached so that I can play with farmbot_os integration of the various Sense HAT sensors and LED matrix.

I tried the latest farmbot_os (6.4.7) on a Pi with a known working Sense HAT attached but got this crash 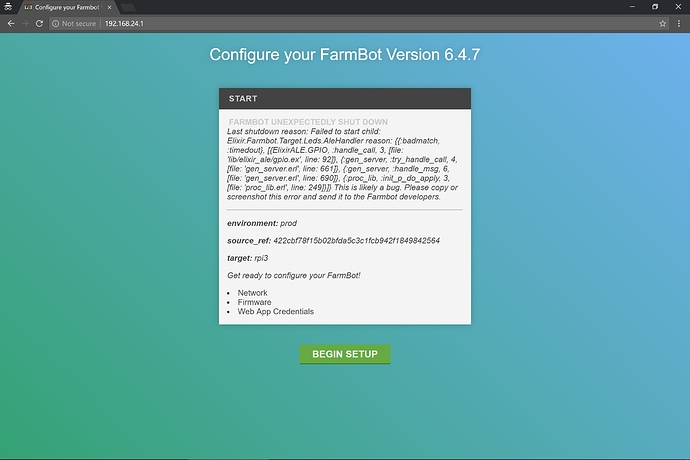 I suppose we could add an option to completely disable Farmbot OS’s builtin GPIO handling. How are you planning on interfacing the Sense HAT? There are no python utilities built in to Farmbot OS by default currently and there aren’t really any plans to add them as it wouldn’t be helpful for most users.

Thanks Connor. I hadn’t really thought the OP through, as I’m only now catching up on the GPIO pins being utilised for the new LEDs and Buttons.

With my (growing) understanding of the farmbot_os details, the only thing that comes to mind about Sense HAT support is some flavour of dynamic (boot-time) sensing of the Sense HAT presence which might disable the new LEDs and Buttons code from init-ing. At this point I’m happy to leave this FR dormant.
For the Sense HAT support, I would use a Nerves+ElixirALE approach.

(Maybe I’ll toy with an Auxiliary RPi3 with Sense HAT and connect it up to farmbot_os with some distribution !

Very cool that you would like to tackle the Nerves+ElixirALE` approach. I don’t think we (Farmbot) have any plans on using the rpi’s GPIO for anything other than LEDs and buttons.