When we were testing out the farmbot to see if it would pick up the tools, I noticed that when it picked up the weeder tool, that the grooves didn’t line up to the tool bay (after it was picked up). So I figured I would go ahead and try to remove the magnetic screws and put them in the other holes to see if that will work. I’m having a hard time trying to remove the screws. How can I remove them without breaking them? What tool should I use? Are they even removable?

Have you read through the basic tool hardware assembly documentation? If you still have questions, perhaps a photo will help explain the issue.

Yes! I see in the document about the magnetic screws. Here are two photos that may help to clarify the issue we’re having. Is this due to it being installed incorrectly? The other issue we’ve been having is the that the lead screw doesn’t want to move upwards. What do you suggest we do to correct this issue without damaging the flex coupling? 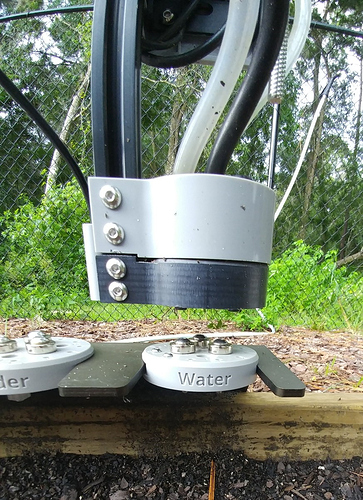 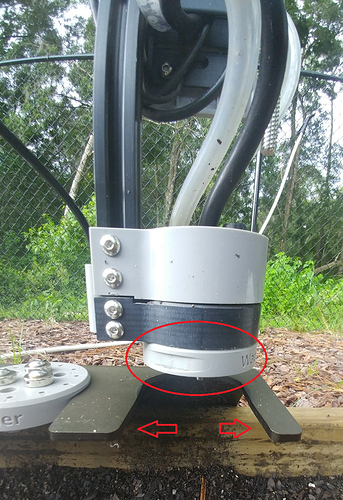 ere are two photos that may help to clarify the issue we’re having. Is this due to it being installed incorrectly?

Please disassemble all three magnets, and make sure that all are having the same orientation on one part. You can test it by having one magnet installed and checking the two others against this one. With the side they reject, they need to face the other magnets after installation… clear enough?

Thanks for the photos. Does it work correctly if you insert the tools into the toolbay backward, with the tool labels facing in? You can also mount the toolbay on the opposite end of the raised bed if you want the labels facing out. Since the tools look like they are mounting well, the magnet orientations are likely correct.

Gabriel and johnmurr, thanks for that suggestion. My coworkers and I finally had some time to work on the farmbot today and realized that that is the issue.

However, we are finding that we are experiencing motor issues on the gantry. It appears one side rolls when trying to make the gantry move forward, and the other doesn’t move. Is this typical for the motors to short out after being in heavy rain? We’re in North Central Florida, and have experienced torrential downpours, storms, and very hot and humid days. Is there a way to test to see if it’s truly the motor that’s not working, or could it be something else? If it is the motor, what’s the warranty on them?

Also, for the GT2 timing belt, with the temperature changes here in Florida and this summer especially, would it be advisable for us to change it out periodically? Does it even matter?

If you have access to a multimeter, you can compare the two X axis motors voltage coming through to help give you an idea of where the problem could be. If you are sure that power is being sent to a motor and it’s not responding appropriately it could be dead.
I’m not really sure on there being any sort of warranty, but it doesn’t hurt to reach out to FB support.

Other than that, I would suggest inspecting the belts and wheels on either side of the gantry. Are the belts both still tensioned? Is there debris on the rails? Are the wheels too tight or too loose?