Turning on / off the camera

On start up and logging in the above command shows up in my command line. I then have to
take a picture to continue. After that all seems to be working. Is there a way to turn off the camera until I choose to use it. 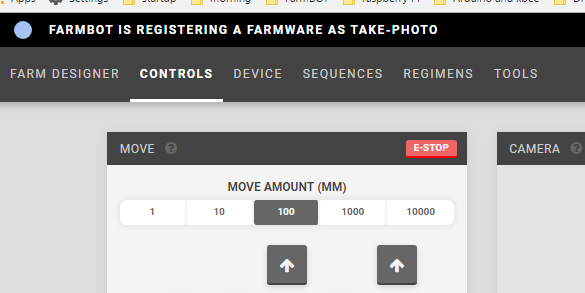 Farmbot just registers all his Farmwares, and because Take-Photo is preinstalled it pops up everytime you boot.
So you can ignore this message and continue with what you would rather do first after its boot-up, like Sync for example.

I will tr sync, but so far I have been unable to moves past until I take a picture.

have I got the taking picture function installed in the wrong place. After I take the picture i can go to the viewing area and scroll forward on the right hand side and get to the new picture.

Is there a way to delete old pictures?

Unfortunately there is no feature to delete old pictures (yet?).
Still it is very strange that you need to take a picture first. For me it is working without taking a picture. At startup I click sync and wait for it to finish.
Well, you could delete your Take-Picture farmware, then this message should disappear.
To delete it you go in your Device page, select the Take-Photo farmware and click delete.
You can install it again when you need it.

I did the delete… thanks

What does sync really do? 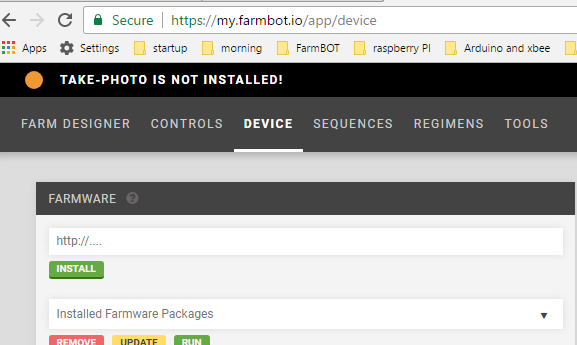 After syncing the vacuum pump works…!!!

Oh, sure, already thought thats up …
When you create a new sequence or even when you change anything you need to sync every time. Else your Farmbot does not get the data that is needed.

Alright, I think your Farmbot should work without Take-Photo farmware but if you run into any kind of trouble with it, you can reinstall it by copy the following link into the upper box on your device page and click Install:
https://raw.githubusercontent.com/FarmBot-Labs/farmware_manifests/master/packages/take-photo/manifest.json

I am now going to put the sequence into a regimen and sync and see it I can get it to run.

Is there a wildcard for the timing time to run? or anything else I should know?

Well, I think you need to wait some time until your regimen starts, since we are living in day 0

Also not sure if regimens are already working perfectly, so you can check this out and keep us informed