The project could be called something like an educational or ultra low cost or even toy clone of Farmbot. My aim is to simplify it to the lowest possible level and makes it from components which are mostly available locally. I would like to reduce the total cost to minimum to bring this amazing Farmbot idea to more people. This project could be something like entry level or just testing or playing with the Farmbot idea without necessity to directly buy the top level and highest quality kits from Farmbot organization. Then later on when you would consider it is something what you want to invest more money to it then you could decide to go to upper level and buy the official products. Or maybe based on your experiences you would construct your own version of Farmbot.

From my perspective the Farmbot idea is amazing. But there is still need to work on it in many areas to really spread it to more gardens and places. Maybe it can sounds a bit like a crazy idea but I can imagine that many people will in the future use such bots in the gardens to produce much more fresh food for themselves. And it will work more or less autonomous and will reduce the time needed for maintain the vegetable garden. Of course this is what the Farmbot is designed for. But from my point of view there are some points which for now can be blocking points for the mass usage. One of them is the price. Second one is the area which it can manage. Then also the fact that components can be broken and it will be difficult to get new one. It will again add some more cost to it. Then I think there is also problem that many people, would be scared from being the Farmbot stolen from their remote gardens. Then also somebody would like to try this idea but do not know if it is really what they are looking for. I think all of these things could be worked out or at least treated in some reasonable way.

As already stated, I consider this Farmbot project as very interesting one and I think it is clear that in the future there will be much more farming bots which will help gardening or farming in small and also in big scale. In my project I would like to aim for now on really small scale vegetable gardens because it should be more for testing and entering the area of farming bot then for stable, long lasting, errorless operation. I would like to also deal with some limitations which I mentioned above.

Based on things mentioned above here are my conclusions about the educational or ultra low cost or toy clone of Farmbot:

Based on the facts above I started to construct the low cost clone from the available components from local stores. For now I just want to make something like a proof of concept if it is even possible to be done this way. But I think it would be also good at the same time to ask your opinion about all of these things and start discussion on this topic. There can be some reliable version invented in the future or it can just stop as not a good direction attempt. But until we try we never know. So that is why I have decided to give it a try and also to bring it to this discussion.

Here are some more technical details about the current approach:

Here are some of my initial pictures of the project (please note that it is still work in progress): 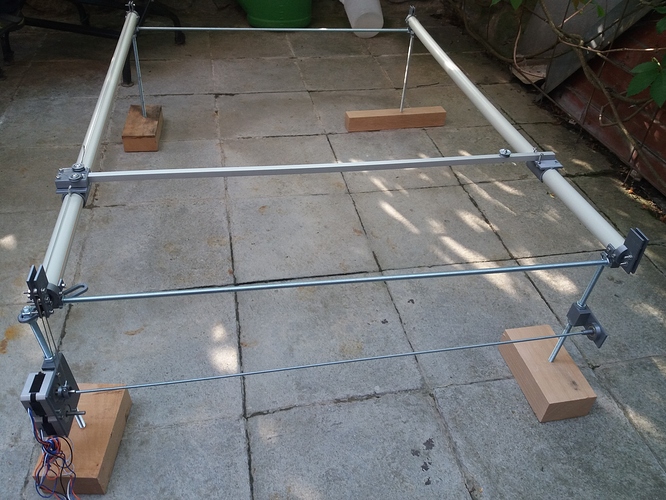 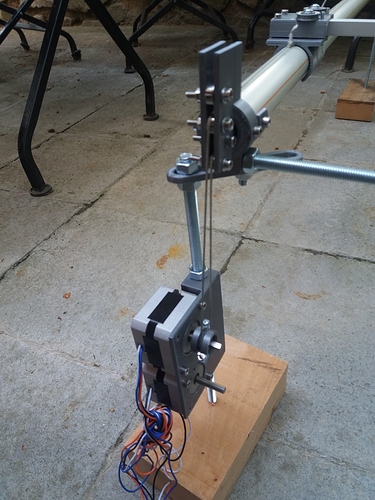 I would like to say that for now I am focusing on small scale which should be just up to 3 square meters (3 x 1 m in dimension). The proof of concept is even smaller (about 1 x 0,70 m). For now I will focus only on watering functionality. Later on there should be seeding and weed trimming added. Like already mentioned above the electronics and steppers will be protected in small locked box which could be made from concrete and based in the ground. The electronics is not moving at all in this concept as all components will be moved by added strings. No special belts will be needed. Because of the electronics and steppers will not move then it will also simplify the carriage of all that stuff against the original Farmbot. Also protection against the rains and various weather conditions will be easier.

Regarding the Raspberry Pi Zero as the only board used I would say following. When I compare the Farmbot with 3D printers I can see some differences. First of all there is no need for such precise accuracy then on 3D printers. On 3D printers 1 millimeter is a big dimension. For Farmbot it is nothing. Also the way how the 3D printer moves can be different then moving of Farmbot. 3D printer must move all axes simultaneously to make all possible shapes and directions. On the other side Farmbot can be moved in one dimension at a time as we mostly need to only point the farmbot to same location. We do not need the path lets say but we mostly need just the point where it proceed some action. Based on it I start to thing to only use one stepper motor to drive all directions (for now just 2 dimensions) and a servo motor which would drive the mechanism which connect the x or y axes to the stepper. But as mentioned above, for now 2 steppers are used and each one will drive one dimension. Based on the current design both steppers are on same please in the box and there have to be made some changes in the steppers behaviour as following. Y axe stepper will always move. Then on the other side the Y axe will move only when Y dimension need to be changed. Better to see the approach on the pictures to make it more clear.

There should be used smaller power source for the bot because only one stepper will be used in the later version. Price of every component mater in this case as I would really like to get the price to lowest possible level. This could help more people to decide to try this project I hope. I would be really happy when it would also attract children or young people to this idea as I can see that farming or gardening is not very interesting for most of them. But if I imagine that everybody could have a bit of land close to his home (also for people living in flats) and have some kind of helping farmer :o) there, that would hopefully again attract more people to grow their own fresh and healthy food. If there will be enough big community around these types of machines then it will also be easier for others to also give it a try as others can help with the construction and running of the tools.

On this point I would like to ask all of you for your opinion. Hopefully I am ready for all positive or negative comments or other ideas. Even if you would consider it not a very good idea or direction it will be enough if we bring together the discussion about such solution. I think it could help all of us to move further on food growing ideas.

Thank you for your time and wish you all the good farming day (with bots or without them :o)

Hi Farmbot funs. Here is update from today about the ultra low cost alternative of Farmbot. I have printed some more parts and attached the machine to electronics. Currently the Raspberryp Pi + Arduino Mega + Ramps 1.4. As already stated I would like in the future to use only the Raspberry Pi Zero with one stepper motor + servo to control the move on x and y axes. But for now to be able to test the construction I used the easier setup with 2 steppers. I have made a short video which you can see here:

I tested the moving in x and y axes and it is working fine with the Farmbot web app. There is already small hose attached to the moving head. Later on I will add small water pump or solenoid valve for water control and also will design and print small spray to add it there too. I would also try to make bigger setup 3 x 1,5 m on the garden to test it in real situations. I hope I will have some time soon to prepare it.

Anyway first of all I will need to modify a bit the Arduino Firmware as I need moving the X axe even when changing the Y axe. That is caused by the machine design where both steppers are on the same place. I will probably try to ask the Farmbot software developers to try direct me a bit for the firmware part where to modify it. Or if anybody would be interested to help with this small modification I will appreciate it as then I can more focus on the hardware part of the machine.

Thank you and have a good farming day