I’m having the same issue too. Picks up some seeds but in general isn’t able to pick up most seeds reliability. I’ve used a variety of needles and it really depends on the size and shape of the seed.

I’ve taken any kinks out of the tubing. I’ve cleaned out the needles to no avail. I’ve checked the tube connections in the UTM and at the pump.

Has anyone tried using a stronger pump? Any other ideas?

@detchi is your vacuum pump currently set up the way FB had initially directed us to place the pump?

I know that after I made my modification to the FB and shortened the pump it helped tremendously with a few issues here and there - as stated above i have really great suction but only if the UTM and tool head are seated properly upon each other.

@Cjaramillogrows No, I haven’t moved the pump yet. I was a little hesitant because I know @Basto moved it and still had problems.

I’m beginning to think the issue is the seal between the needle and UTM. For example, when I take the entire seeder tool off and turn the vacuum on, it gets pretty good suction. However once I put the seeder injector back on and add a needle, the suction is pretty week.

Works with the lightest and roundest of seeds. But if the seeds are a little heavier or irregularly shaped, no good.

thats is a pretty good idea, i also noticed that about the UTM and the seeder tool head. Even thou i made the small modifications i cant confirm 100% wether or not the change i made has made a difference or not. I feel like it has made a difference only because before i changed the vacuum location the amount of suction that came from the UTM without the tool head was also extremely weak but once i moved it the amount of suction was A lot greater. But when your working with such irregular variables and constant changes in shape greater suction doesn’t always mean better seed pick up rates.

Right now i’m hold off on the seal and trying to figure out why my FB isn’t getting smooth movement on the V-rail but I’ve still been thinking of ways to get a better seal.

Hi, we have moved the pump in the new suggested position (as shown in the picts I’ve posted on the forum), we have then shortened the hose lenght (cutting away all the X Y axis part) but it still can’t pick up any seed.

Of course we’ve been trying with several needle-seed coupling settings but no results. We also purchased a new vacuum pump (same kind of the one in the kit), hoping there was a problem with the provided one, and we even made a test with only 30cm long hose. I opened the UTM and placed a clamp on the tube at the nozzle, but still no improvements.

Our suspect now is about some loss in the coupling between UTM and Seeder.
Today we also tried to put at the end of the nozzle a plastic terminal 3mm wide funnel thinking that different materials like seed and plastic should be different from steel and seed. Sometimes it works but is not still reliable.

If you unscrew the needle from the seeder, place the seeder on the UTM, run the pump and put your finger over the hole is there much suction? Also is the air outlet hose on the pump able to push air out that clear plastic bottle or is it blocked? My fit between the UTM and the seeder is really good\tight.

@Basto - There is definitely some kind of seal issue around the UTM and the seeder head.

Even for me, Although i moved the seeder pump to the Z axis. Which did solve my zero seed pick up rate, I’m still having an issue with having to manually give the UTM and tool an extra press to make sure the seal it proper for a 100% successful pick up rate.

also, did you notice a difference in the suction power when you moved the pump closer?
are you getting a slightly higher success rate when it comes to picking up seeds?

Have you tried"pinching" the UTM and seeder toolhead together and holding it pinched, then testing the pump by turning it on? How I deduced that the seal is still improper is because when I would pinch the tool head and tool together for a better seal, I could hear the difference in sound from the vacuum pump. As if the vacuum is under a bit more of a load.

Id try testing the pump by holding the two together to create a better seal around the male end of the UTM and vacuum port on the toolhead. If you can hear a significant difference in the sounds the pump is making then that can help confirm that its a UTM and toolhead issue creating the proper seal.

I wonder if you guys need new magnets, I remember reading about magnet quality issues here: Quality of UTM magnets. It might be unrelated but thought I’d share.

Thank you Cjaramillogrows and whitecaps, me and Basto (my partner) tryed to do several test with the UTM and seeder tool seal, even holding them by hands, but I couldn’t hear any difference in the vacuum pump motor sound.
We’ve then tryied to modify the end of nozzles adding short pieces of soft plastic hose, at beginning it seemed improving the suction power of seeds, but it always loose them after few seconds.
I think that we’ve to work on the leak of vacuum in the UTM and tool junction.

I have the same problem with the seeder tool. If I squeeze the UTM and seeder together when the pump starts then I get 100% success picking up seeds. Otherwise, it’s near zero. When I pinch them together I can feel them seat properly and can hear the load on the vacuum. I can’t find anything wrong with the magnets themselves and they’re all oriented correctly.

Still not sure what the best solution is to this problem.

Hi aal,
we have found this vacuum pump that’s works better in case someone is interstedto the device 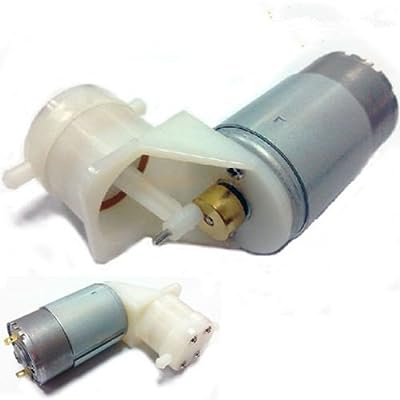 I am also using this pump from the beginning. Vacuum is great but its a hell of a noise

50dB! wow! but the specs show that this has some really good suction. this thing could pick up anything thrown at it.