Methods of having thousands of 5mx15m farm plots is in no way, shape or form, efficient.

The only way I can think of increasing efficiency is to completely use timing belts instead of lead screws that way you could increase the speed of which the FarmBot operates.

But as for “Thousands” yeah umm FarmBot isn’t really a commercial product it’s more for home use.

We’re working on larger devices for release next year, but most likely FarmBot will never be on the same level as traditional industrial agriculture. Rather it is most suited for small-medium scale stuff in a distributed fashion. So while one potentially loses the mechanical efficiency of a larger, centralized system, they gain the efficiency of having the food produced locally (less distance travelled, more fresh, less storage required, etc)

I am talking about scaling of monster proportions. Eg. being 1 mile by 1 mile =1 sq mile of farming.
How many 5mx15m indivual plots would this be? This would be 1609.34=1610 plots by 1610 plots.
Grand total of 2.6 million plots to cover one sq mile.
Warning: ALOT of my problem-solving and my methods of thinking are contained in this post!
First off: list the base of the problems of scaling to such a large degree.
-problems 1: the presence of two y huge axis’ on the ground
problem 2: The vastness of such x axis in the air.
Problem 3: the vastness of y axis’ to support said vastness of x axis.
Problem 4: power, to be solved after the other problems are answered.
Alright then, so lets eliminate the y axis’, but what to replace them with?
1 word: Zip-lines.
for each y axis have a single zipline (cable) stretching from corner of farm to corner of farm.
For simplicity, lets put light houses at each corner of the farm (to be revised later)
Now the y axis is 2 5280 ft cables separated by 5280 ft of field.
Lets put a single cable stretching between the two y axis’ as an x axis.
Now, both cables are a single cable, stationary pieces, not a loop for both cost and simplicity.
The head of the device that picks weeds, plants seeds, nd does everything else, is on a cable crawler. (a device that crawls along the cable from one end to another.)

Yes, I had typed up that last message weeks ago, and without rereading it I posted it.
Since then, I have worked out a few kinks in the scaling issue. Number One: Lighthouses on each corner of the farm. Replace each lighthouse with a cell phone tower-like structure, both cheaper, quicker, and easier to construct.
Imagine this would you?
A parcel of farm land, with a cell phone tower-like structure on each corner of it. Take out a blank piece of paper, and follow the coming directions. On that piece of paper, write “A” on the top left corner, “B” on the top right, “C” bottom left, “D” on bottom right. Now that you have your four corners marked, they are the cell phone-like towers. Draw a line in between Tower A and C. Label that line y axis. Also, draw and label a line in between towers B and D. You have just drawn your y axis cables. Those cables are stationary, but are not bolted to any tower. They are looped over pulleys and connected to free hanging weights in all four towers. Such a setup would allow the cables to stretch and have a constant tension on them at all times without anybody having to re-tighten the cables. Now draw a line, anywhere, in between the two lines labeled y-axis and where this line intersects each y-axis, draw and shade in a circle. Label the circles Z and W. Also label this line x-axis.
To recap: Your paper has a tower in each corner, labeled A,B,C, and D. You have a line in between A&C and B&D, each labeled y axis. One line connects the two y-axises by circles labeled Z and W. This line is labeled X-axis.

Circles Z and W each are cable crawlers. They are comparable to the gondolas at really big ski resorts in how they attach to the cables. However, they are unlike them in how they move along the cable.

Draw a small square in the middle of the x axis and label it Q. The Q-square is the planting, watering and weed extraction device with a video camera on it.

Your drawing is now complete. It is a model layout of a farm the size of which you wish to create.
To get power to circle Z, circle W, and square Q. Think of a setup similar to that of which a subway works that has overhead power lines. Information to those control would travel wirelessly unless you wish to have a 3rd grid of wires.

I think the idea size are greenhouses with 4 farmbots is about the ideal size (with a sized up unit… in a greenhouse crops can be grown year round and farmbot shines most in a tight enclosed setting.

this is not going to scale to industrial ag

Yes, scaled up for glasshouse agriculture is the way to go. Beyond that drone tractor systems are probably the way to go. In theory they could tow systems behind them that can do a lot of similar work to what FarmBot dose on a small distributed scale.

Hello
I’m an organic farmer and new member of this forum.
Just to let you guys think out of the box I would like to add the following:
Today I mounted an electric rotary tiller to an outdoor water boom running on a monorail.
Worked pretty well.
It still needs a rail to move sidewards, leaf protection, bigger knives,…
Unable to upload a movie at the moment.
I don’t really see how the farmbot can cover larger areas killing weed by weed and sowing seed by seed.
Any suggestions for the side rail system or other? 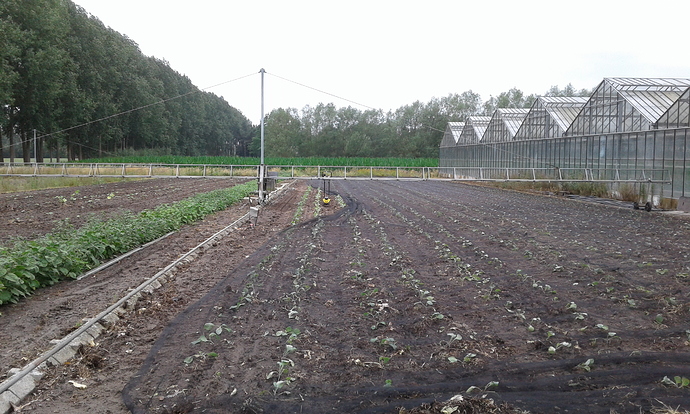 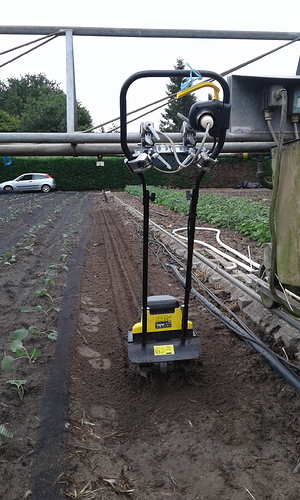 Hello people, I new at this forum,
Please sorry for my english
i thinking in a simple question … nobody put the complete farmbot in a car?
please tell me what do you know or think about this…
and what would be the reasons you believe would make a fall a project like this.
Thank you for your comments.