For some reason, my grey matter can’t make sense of the schematic wiring diagram provided.

Does anyone have a more in depth version, or perhaps and series of pics or a video?

Can you link to the documentation which particularly bothers you? 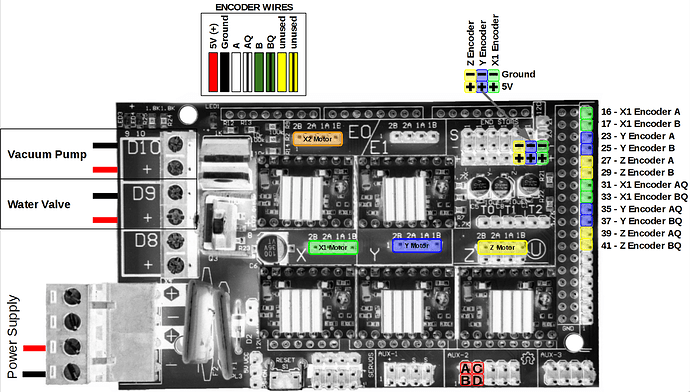 There are a few things to connect on this board. Is there anything that you’ve connected so far?
What are you trying to connect?

OK, first consider that everything is color coded on the image. Black and red wires on the left side represent the power connectors that should be made from this board to the power supply module, vacuum pump and water valve. Note that all those cables also have color coded bands on the end of them and that’s described in the documentation.

The block at the top left indicates the wires that are on the end of each of the encoder cables that went to the four motors. Of those wires, the red and black wires go to the block on the top right that has “yellow, blue and green” +/- symbols on the pins. The red wire of each encoder cable goes to one of the + PINs and the black goes to one of the - PINS.

For the x-axis, note that you will only be hooking up a single encoder cable – the one that is nearest the electronics board. So, I’ve already described how to hook up the red and black wire from each encoder cable. The A, B, AQ and BQ pins of each encoder cable get connected to the far right side. As shown in the encoder wire color diagram, A is White, AQ is a white wire with a black strip, B is green and BQ is a green wire with a black strip. The yellow wires are not used.

With that information, you should be able to connect the A, B, AQ and BQ pins from each of the X, Y and Z axis to the right hand pins.

Next, you should have a thick gray cable with 12 pins in it that ran to the tool head. Those pins are labeled A, B, C and D on the tool head, and 1, 2, 3 and 4 on the wires. Only those four of the 12 pin cable get connected to the 4 pins in RED shown on the bottom of that picture as A, B, C and D.

Finally, then each motor also has a driver cable. The pins are in a unified connector. Each motor drive cable gets connected to one of the four headers shown in the middle of that image as Orange (X far side motor), Green (X near side motor), Blue (Y motor) and Yellow (z motor). Orientation matters a little. If you look at those headers there’s a black wire on one side. I’d put the black towards the right side of that image for X1, Y and Z and towards the left side of the board for X2.

sorry…I was away for a couple weeks…looks amazing…thank you!
I’ll let you know how it goes

AQ and BQ are the differential signal wires for use with a differential encoder. They are sometimes referred to as A+ and B+ or A’ and B’, and are the inverse of the A and B signals.