Can not configure farmbot after parts swap

I have been fighting to get my farmbot up and running for some time now. I refuse to give up! I have just finished rebuilding the electronics from the ground up after somehow destroying the arduino board (See this post). I’m using Rpi version 3 running 5.0.2 OS and a brand new mega 2560 and RAMPS 1.4. I did a pin read out and determined I have good stepper drivers installed. I have good wifi and passed the web socket test. After sometime, the stage is finally set for me to get the device configured, calibrated, and hopefully running! when I plug in the device the red and green lights go up on my Rpi, and the device appears on my network. I attempt to connect to the deceive but after sometime see this message. 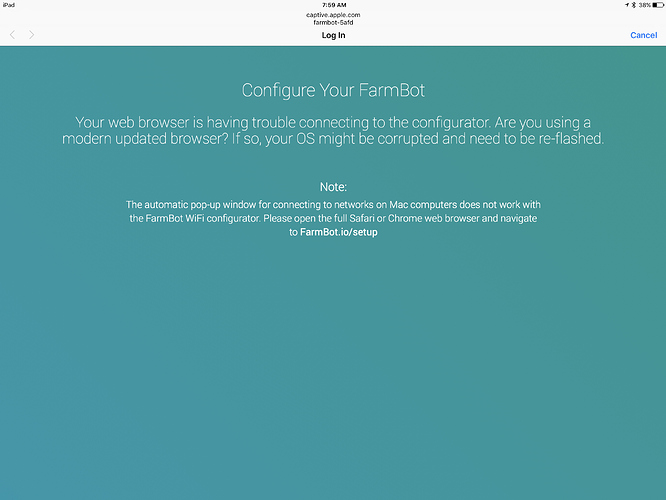 Has anyone seen this before?i have reflashed a dozen times with no luck. I am using an iPad Pro with either chrome or safari. Privacy mode is disabled. This same set up worked and allowed me to configure before the aforementioned hardware crash, so I don’t think iPad/mac is the problem. One other potential clue is that the arduino has a consistent double red blink and the ramps has the same blink in green. I assumed it was because it doesn’t have the arduino FB firmware installed yet but I don’t really know. When I go to farmbot.io/setup I just see this 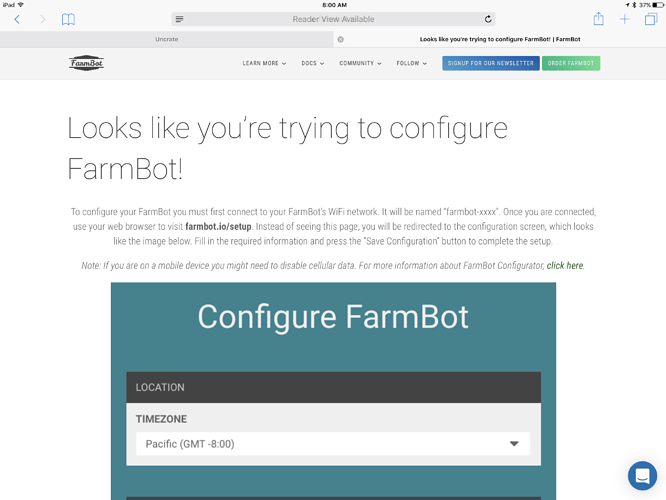 This looks like a browser issue. The first screenshot is of the Apple captive portal, which doesn’t work with the FarmBot WiFi configurator (see this post for more information).

When you say “full” Safari or Chrome, I assume that you mean to say “running on OS/X” not “iOS”. In the earlier post, the guy was using an iPad Pro, which while pretty powerful, is still an “iOS” device and not an OS/X device.