What’s the best way to manage my Farmbot’s electricity consumption?

Letting it switched on 24/7 is wasteful but hitting “Power and Reset -> Shutdown” means having to restart it manually the following day and on top of that, the farmduino stays switched on.

Thanks for the suggestion but unfortunately it’s not an option as I don’t have the space.

Maybe you overrate the space needed. So just as an example:
When you use a battery you won’t need a solar panel with 150 or 200W. A 100W solar panel should be enough with an according battery and has about 1000 x 700mm. As you are living in Switzerland (afaik Geneva) the mounting angle would be around 45°. So the floor space needed is about 1000 x 500mm. You should also be able to put the batteries and controllers underneath it. So there shouldn’t be more space needed.

Don’t take the above calculations for granted but just as an example.

Thank you very much for having taken the time to explain. I think that you are right and I shoudl investigate further.

I don’t know much about solar panels and charge controllers. Would you be able to please recommend a good place to start (e.g. which products offer decent value for money)?

I’m also not a specialist for solar power… But these are my findings and the stuff I bought so far:

For the charger I suggest SmartSolar MPPT ones from Victron Energy. They are capable to work with 12 or 24V (autodetect) and have Bluetooth for statistics.
For the DC-DC converter I suggest the isolated Orion-Tr ones from Victron Energy. In my example I have the Orion-Tr 24/24-5 which brings 120W constant and 150W max). That should be sufficient but does not cover the constant 150W of the power supply which comes with the FarmBot v1.5. To be safe I also have the Orion-Tr 24/24-12 with 280W constant power as backup in the drawer it there are issues.

For the battery(es) I also suggest to go for Victron Energy. I have the AGM Super Cycle ones. For the calculations on capacity needed I’d suggest to have a look here: https://genesis.farm.bot/docs/power-farmbot-with-solar
If you have additional components you will have to take them into the calculation (i.e. rainwater pump). I’m completely overpowered (2 x 12V/125Ah => 3’000Wh => about 6 days at max power (500Wh) without charge

). There is no need to go this high. The batteries do have a high price tag (~600.- per piece in my configuration). So better calculate with less overhead and depending on what you really need. Maybe add a watt meter to your existing configuration and check what your consumption really is within a longer period of time (i.e. a month). This should give you real world data and make it easier to calculate the needed capacity.

I mounted the charge controller and DC-DC converter in a IP55 metal box from Rittal. 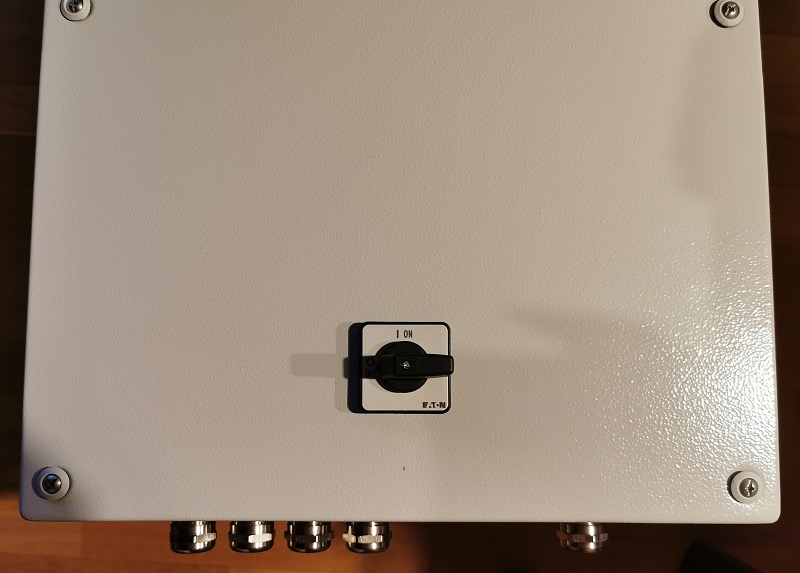 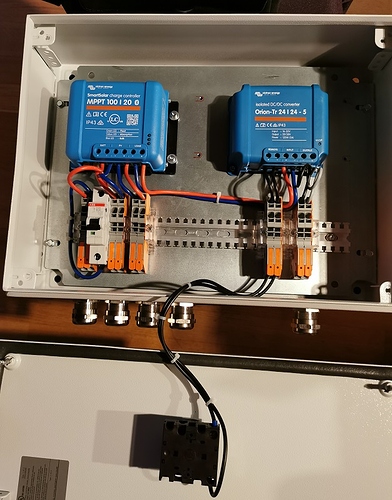 For Switzerland there is https://www.swiss-victron.ch/. They have all the Victron parts. Maybe also contact a local solar expert which could help you out. That’s what I did.

Don’t hesitate to ask if you have any more questions.

Thank you so much for all the effort you have put into your post. It’s much appreciate and gives me a great starting point to do my research!

@ClosedCircuit Have you considered using a low-tech option, such as a garden timer that only allows the device to operate for a specified number of hours per day?: 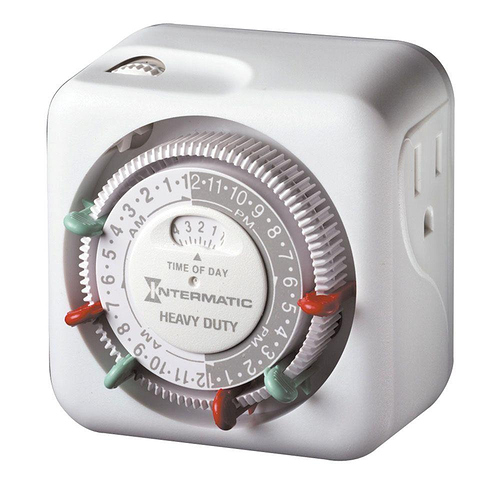 These timers are extremely reliable, inexpensive and easily purchased at any home improvement store.

To avoid data loss, you could create a Farm Event that powers the device down a few minutes prior to the timer.

Thanks @RickCarlino. I thought about getting one of these but I am also considering inserting a wifi smart plug inside my home, before the electrical cable goes out to the farmbot. This would allow me to control it remotely and/or via IFTTT.

Just stumbled over a Youtube-Channel which talks about solar power and off-grid systems:
Youtube: https://www.youtube.com/c/WillProwse
His website: https://www.mobile-solarpower.com/

Think it may also help to answer some pending questions.

At the end, I chose to add a smart plug in-between my fuse box (inside the house) and the Farmbot.

Following on from @RickCarlino excellent suggestion, I created a shutdown sequence which is triggered 5min before the smart plug switches everything off.

As an aside, my FB draws 16.1W in standbye mode (i.e. when it’s not doing anything) and 4W after shutdown. Switching it off completely in between planned sequences will therefore save quite a lot of electricity in the long run. 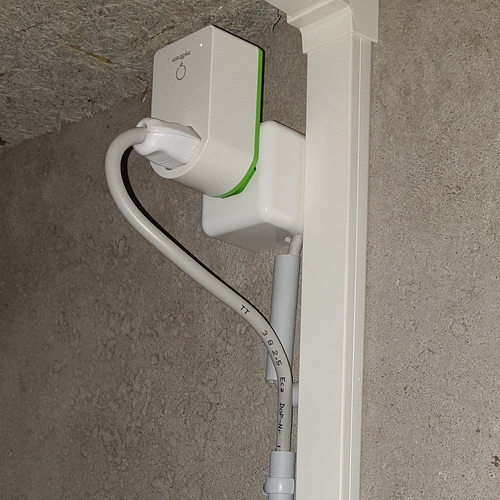 my FB draws 16.1W in standbye mode (i.e. when it’s not doing anything) and 4W after shutdown. Switching it off completely in between planned sequences will therefore save quite a lot of electricity in the long run.

thanks for sharing this data with us!

Let’s say that the FarmBot runs about half an hour a day which would result in about 98% standby time. Calculated over a year it is about 138.2kWh for power used for standby. Based on the 100% renewable energy tariff in my region in Switzerland (EBL Grün) that would result in about CHF 49.- a year.

So I need to run my FarmBot on solar in standby for about 40 years to get the break even.

It’s not just about the money, is it?

Luckily, the myStrom wifi switch was CHF 39.-- and I spent about 10.-- on a plug and socket. Looks like I should break even in about a year.

I should break even in about a year.

I’ve finally been able to install my solar panel and do the drain outlets. First the weather was to hot to work in the direct sunlight. Afterwards it was raining constantly… 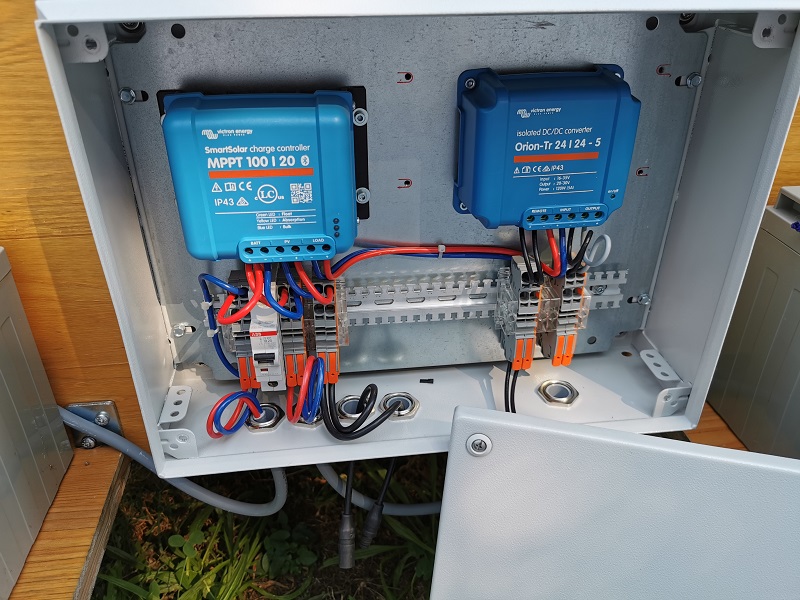 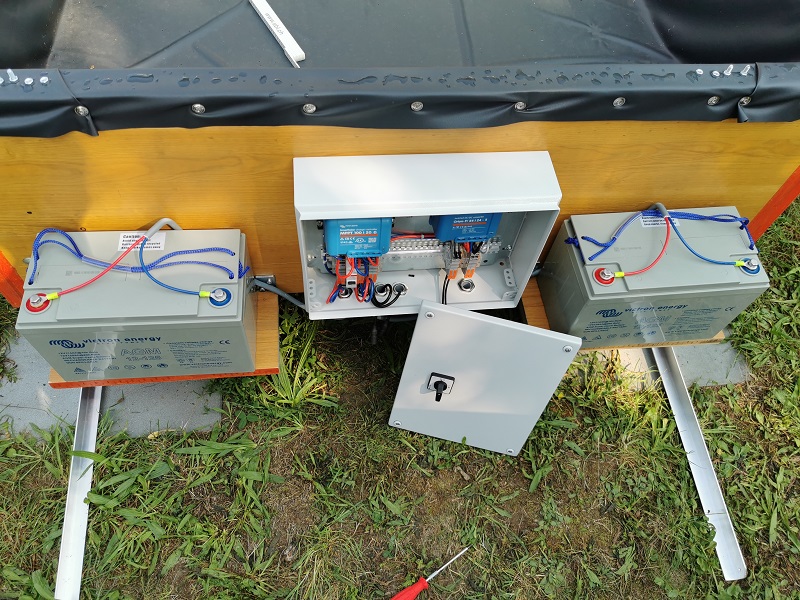 Solar Panel (CC and batteries are underneath) 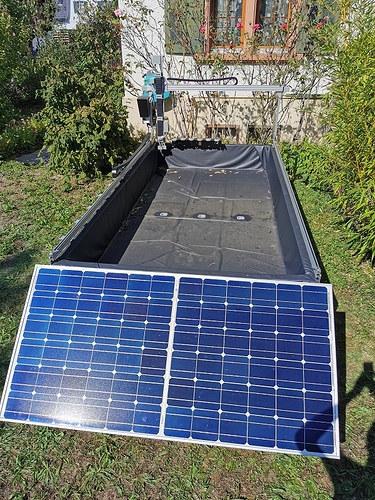 I just wanted to explain a few things about the power consumption of the FarmBot.

The minimum power consumption is about 50W and this is what the FarmBot uses in a typical idle state. This is what FarmBot consumes just to keep the FarmBot on and connected. This 50W includes about 30W for the Raspberry Pi computer and 20W to power the Farmduino.

During an average FarmBot power day, the power consumption typically varies between 50W and 150W depending upon the activity that you have the FarmBot doing. 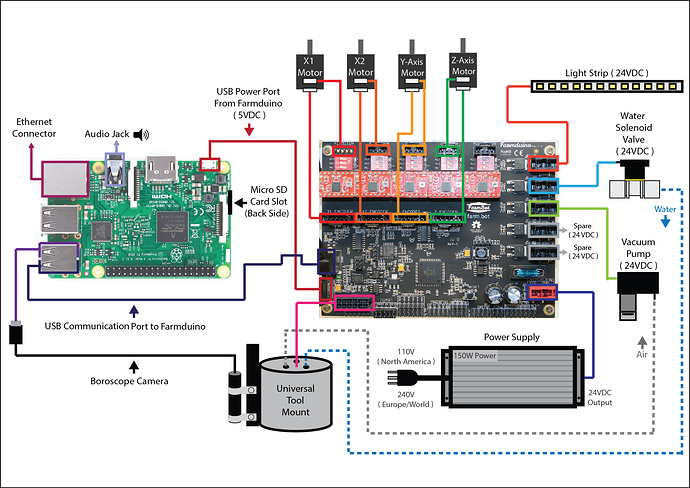 When it comes to power consumption, the FarmBot doesn’t consume a significant amount of electricity in comparison to other appliances in your house. If you had your FarmBot working and doing tasks consuming 150W during the day and just running idle at night, assuming you have 12 hours of activity and 12 hours of idle time, you would consume 150W x 12h + 50W x 12h = 2400 W-h

The average electricity rate for the typical home in the USA is about 15 c per 1000W-h or using slightly different units $0.00015 per W-h.

Recommendation on the practical use of Solar with the FarmBot Systems

Yes, you can use solar to power the FarmBot. It has been done before and we have documentation on it located here:

DIY instructions for powering your FarmBot with a dedicated, off-grid solar energy system

From a reliability standpoint, although it is possible to use Solar power to energize the FarmBot we don’t recommend for new FarmBot users because it adds another potential barrier to reliable operation.

If you do decide to proceed with a solar system you will need to pay special attention to the sizing of the solar power system and the requirement for battery capacity to last through several days of overcast sky. If the solar power system is under powered the FarmBot does not have any voltage protection. If the battery system, or the solar array is undersized and there are a few days without sunshine, the voltage will drop enough for the system to be depleted. The whole FarmBot system will go dead and there will be no communication back to the cloud.

At least for beginner FarmBot users we recommend that you plug in and use a dependable power source to power the FarmBot.

@ClosedCircuit Please share your experiences with us so that we can better understand the use of solar power with the FarmBot. Any advice, tips or tricks that you discover will be helpful to the community.

If you do decide to proceed with a solar system you will need to pay special attention to the sizing of the solar power system and the requirement for battery capacity to last through several days of overcast sky.

That’s really the main thing and concludes everything in regard to solar power.
As listed above I have a 170W second hand panel which is about 10 years old.
That’s definitively not enough! 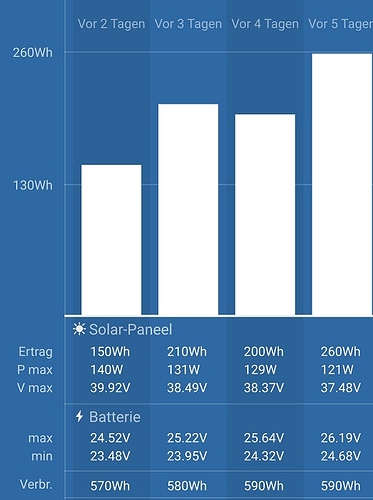 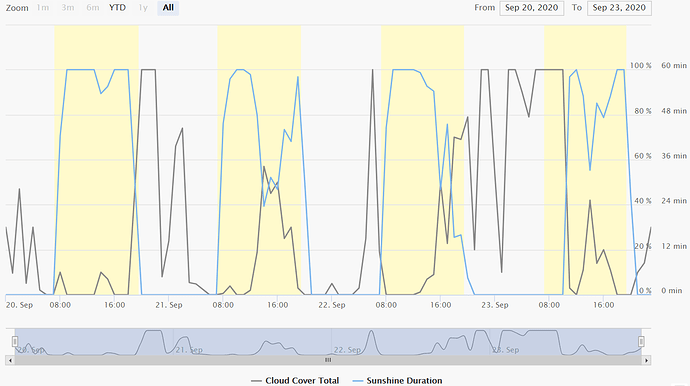 The last few days there was an overcast as well as due to the lowering sun some shading from the neighbours house. Combined with a 10 year old less efficient panel this won’t be enough even for standby.
I will now get a 355W LG NeON panel which will be much more efficient especially during overcast and in half shade. Hopefully this will bring enough energy to run the FarmBot up to the beginning of November. If not I will have to place it somewhere else where there won’t be partially shade at the beginning and end of the season.

From what I know now and from what I’ve experienced in the last week, the article about “Power FarmBot with Solar” is very misleading in regard to the Genesis 1.5. Even the standby consumption is well above any listed energy usage in the table “Total Daily Energy Usage”. I based my calculations on that table and expected a battery life of about 10 days with my 24V (2*12V) 120Ah batteries. But now I see 580 to 590Wh consumption even in standby. This leads to about 5 days max on standby on my batteries… I think the whole article has to be rewritten. I’m not a native English speaker but if you want I can help you out with my findings and suggestions.