My name is Brennan. I’m one of the fall interns working with the food production team at KSC. I’ve been working on provisioning FarmBot using your guide and it looks like the API is running successfully so far. I’m running it via Linux Ubuntu 16.04 on VirtualBox. I have no previous experience working with VMs or running private servers, so please forgive me if I say anything wrong.

It also looks like the MQTT is communicating with the API (I can see the API terminal responding to the MQTT, and in the MQTT terminal it is saying:
Downloaded certificate from http://localhost:3000/api/public_key

When I open the web app in the browser at localhost:3000 it looks right, but displays an error saying that the web browser is unable to connect to the message broker.
In the top right, of the browser in the app, it says FarmBot is disconnected. FarmBot is plugged in and appears to be on, so I’m not sure where the problem lies. Obviously, none of the controls produce any physical response from FarmBot.

If you have any suggestions on where the problem is or how to troubleshoot, please let me know!

Thanks for your help,
Brennan Cordova

It’s great to hear from folks at the KSC.

Edit: You will also need to update MQTT_HOST as well.

Are you saying both the MQTT_HOST and API_HOST should have the same IP address?
The address I input for both of these was found simply using the arp -a command in the terminal.

Are you saying both the MQTT_HOST and API_HOST should have the same IP address?

Not always, but in your case, I think so. You are running MQTT and Web on the same machine, correct? If that’s the case, then they will have the same IP. Some users will host the MQTT server on different machines.

Here’s a few things you can try:

Other things that are helpful for debugging:

Yes, both of the ENV.fetch show the same IP address that I input into the host entries. I am running both from the same machine, so that makes sense.

Here is the connectivity panel from before: 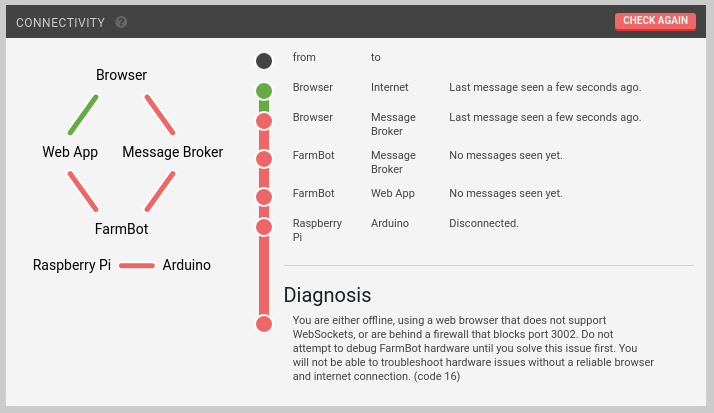 I have updated both API_HOST and MQTT_HOST with the IP address of the VM. I did this and started up the API with “rails api:start” and the MQTT with “WEB_API_URL=http://localhost:3000 npm start”

This gave me the same error when loading the page, but this time the page would not load. 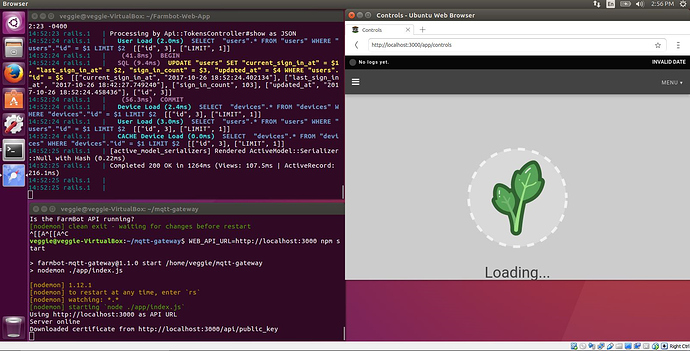 I tried again running the api with:

and running the MQTT with:

This time it could not download the certificate and when I navigated to the webpage it did not load correctly. 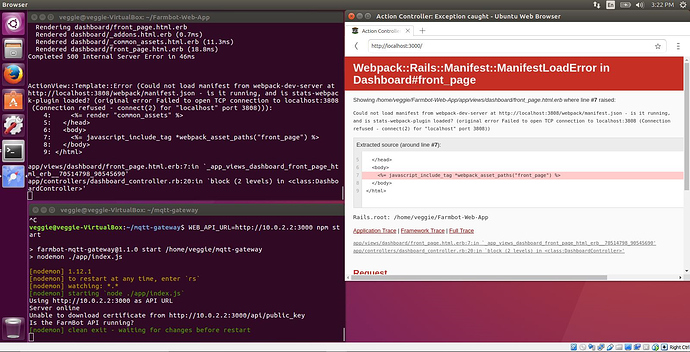 I would recommend using the Chrome web browser; the browser in the screenshots may be causing the message broker connection issue.

If you still encounter problems, there are some debugging tips for a similar issue in this post.

Also, if the page doesn’t load completely, try logging out and back in.

@BrennanNASAveggie
I initially thought you were running an older version of the app, but it seems that you are on a quite recent version (23 October).

Here are some things to try:

Thanks for all the details provided. Also, as @Gabriel has already mentioned, it is best to use Chrome until you are certain that all the servers are running. Some browsers have issues with WebSockets, which are required for FarmBot.

Wow, thanks so much Rick. I’m gonna work on this throughout the weekend and I’ll let you know if I run into any more issues. It looks like my computer doesn’t support VT-x/AMD-v visualization needed for running Ubuntu 64 bit, so I’ve been running the 32 bit version, which Chrome doesn’t support anymore. I’ll try to find a workaround for this or try out some other browsers, and update for the new setup.

Thanks again for all your help!

I’ve got the same issue like BrennanNASAveggie. Tried Firefox, Chrome and Chromium and everywhere this error comes up when opening the address 10.0.2.15. Websockettest shows that they are working fine. 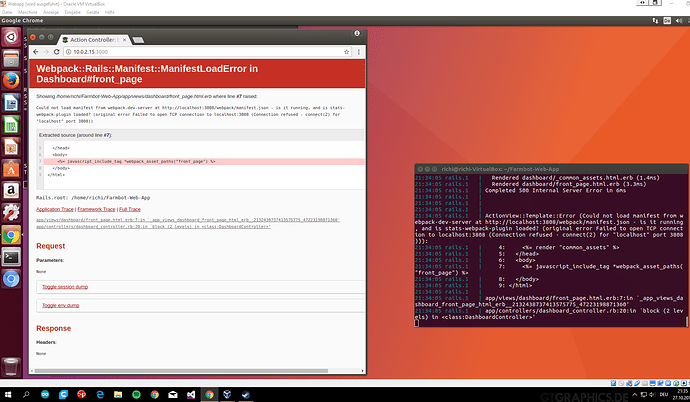 I just noticed that there is some kind of an error when the webpack is beeing started: 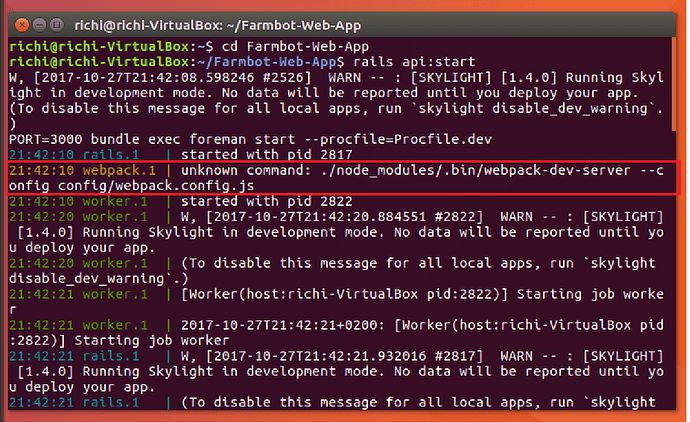 Is it safe to assume you ran yarn install during setup?

If you did run yarn install during setup, were there any other steps you had to take during setup? Please let me know and I can look into a fix for any other users that are facing the same issue.

Thanks @RickCarlino, running yarn install was the solution, even though I’m pretty sure that I did this before.
I was following all the steps in your install.sh file but got stuck at running gem install bundler. There was an error message that “gem” is not a function and ruby is not installed. So I had to run rvm --default use 2.4.2 what somehow made it work.

Everything seems to run fine now. I’m using VirtualBox V5.1.23 and Ubuntu 17.04 64-bit. All browsers Firefox, Chrome and Chromium work for me.

@BrennanNASAveggie
If you’ve got the same log message in the terminal when starting the API, check your Farmbot-Web-App/node_modules/ folder. In my case there was nothing inside before running yarn install again.

Also if your mqtt broker doesn’t connect (econnrefused), you may have to use 10.0.2.15 at API_HOST and MQTT_HOST at your application.yml file.

Still running into some issues, and I believe it has to do with a problem in the docker install. After installing the pre-reqs for docker and entering curl -fsSL https://download.docker.com/linux/ubuntu/gpg | sudo apt-key add - I receive error:

I can’t tell if this is an issue with the repository or something on my end. I’ve been looking for another way to install but nothing is working. Any suggestions?

Docker is only needed for the next version of the message broker, which we’re still working on with regards to self-hosted setups.

For now, I recommend using the old message broker, which can be set up via npm install and run with npm start after starting the web app.

I tried this and ran npm install successfully, but I cannot run npm start like this at all, even with the web app running. I continue to get the message ===We use 'rails api:start' now.=== although I am already running this command.

rails mqtt:start also does not work

npm install and npm start should be run in the mqtt-gateway directory.

Okay, I ran npm install successfully in the mqtt-gateway directory, and now can run npm start in mqtt-gateway and rails api:start in Farmbot-Web-App directory, but I now receive the same error from the web app that I did in my initial post:

“Your web browser is unable to connect to the message broker.”

In Chrome you can use Ctrl + Shift + J to open the JavaScript console and enter store.getState().auth.token.unencoded.mqtt to check the MQTT IP address. The returned value should be the same as MQTT_HOST, of the form "0.0.0.0". Do you see any errors in the console like WebSocket connection to . . . failed? This would probably mean an address configuration issue, possibly related to the VM. Have you tried both "10.0.2.15" and "10.0.2.2" for MQTT_HOST?