Today we are announcing the beta release of FarmBot OS v14.0.0.

FBOS v14.0.0 is a stability upgrade. Most notably, it contains a complete overhaul of the firmware handler. This release does not yet support StealthChop, but has many improvements that will eventually pave the way for StealthChop support. If you have experienced issues in the past related to firmware flashing, movement error recovery or general firmware stability problems, this release addresses many of those issues.

If you experience problems not seen in the previous version, please leave a comment. 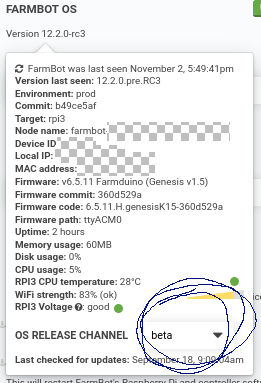 To add onto Rick’s announcement, there are some known issues we are already aware of and working to resolve during the beta phase:

there are some known issues

The "firmware refactoring" certainly looks like it was worth the effort . . well done

A little update on our progress here: @RickCarlino just released FBOS v14.0.0-rc47 with arduino firmware v6.5.34 to the beta channel and we’ve also deployed some corresponding updates to the web app.

Thank you all for the continued patience and support as we work to improve FarmBot!

FBOS v14 is no longer in beta. We will publish an official release announcement shortly.