FarmBot Express owners may now ENABLE STALL DETECTION for all three axes. This feature utilizes the Trinamic TMC2130 stepper drivers’ capability of measuring back-current as a way of determining motor load, and thus when a stall has occurred. This feature has been a long time in the making, and we still have a ways to go towards optimizing this functionality, but we wanted to make it available to you all today as a public beta and solicit feedback.

In addition to enabling stall detection, there are a few other settings available for tuning the system: STALL SENSITIVITY, MAX MOTOR LOAD, and GRACE PERIOD. 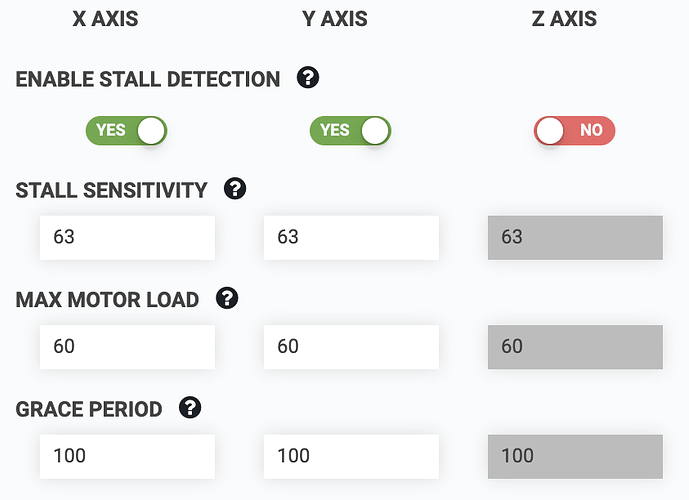 Thus far we recommend a stall sensitivity of 63 (least sensitive), a max motor load of 60 (out of 100), and a grace period of 100 steps to ignore during acceleration. We may change, add, or remove tuning parameters based on additional testing and feedback, but here’s what you may be able to expect today:

When stall detection is enabled, the stepper drivers will report the value that we’re using as a MOTOR LOAD heuristic. You can see the realtime, average, and max load for each motor in the Controls panel right above the current location fields.

To tune your stall detection settings, I recommend moving your bot back and forth along an axis and monitoring the motor load. Then change a setting and repeat to see how the load changes. Your goal is to achieve low motor load during normal movements, and a high motor load when stalling the bot against an end location. MAX MOTOR LOAD should be set such that the bot will always think it has stalled when it is actually stalling, but not get falsely triggered during normal movements.

There is also a new setting to show FARMBOT MOTOR LOAD in the map. Whenever an axis is reporting loads in the yellow, orange, or red threshold ranges, an axis label will be dropped on the map where this high load occurred.

The weeds panel now includes a new section for PENDING weeds. This will soon be used as a way to triage weeds that are detected using FarmBot’s camera, allowing you to more easily approve or disapprove results. Clicking

will move the weed to the ACTIVE category, while clicking 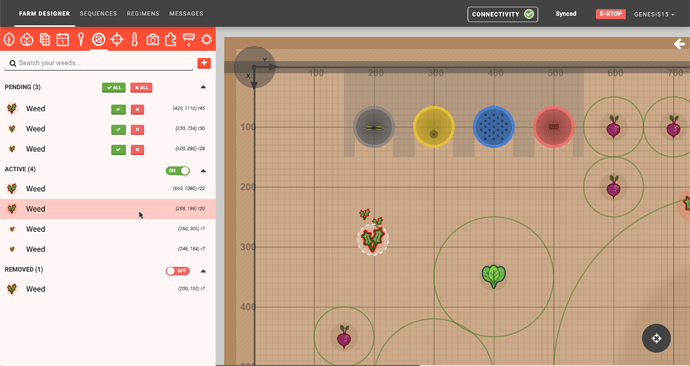 Additionally, there is now a white dashed line indicator shown around weeds in the map when mousing over the corresponding listing in the panel, and when the weed is selected. Panel sections are also now collapsible, feature map layer toggles, and indicate the number of weeds in each category. 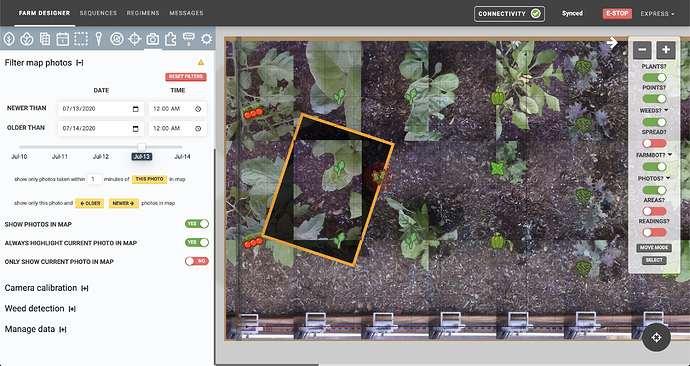 6 Likes
Limit Switch Addition
To infinity and behound, then stalling on all axes on Express V1.0
Z Home not stopping at Home - Express V1.0
jensGeorgsen August 1, 2020, 9:35am #2

Thanks for the update! Just trying to figure out the right way to find the correct settings for the beta stall detection. I am a little confused about the user interface. When I change the “motor load” in the settings, the log reports “set max missed steps, y-axis to … (steps)”. How can I imagine the connection between “load” and “steps” is made? Or is the UI just writing to the wrong parameter? 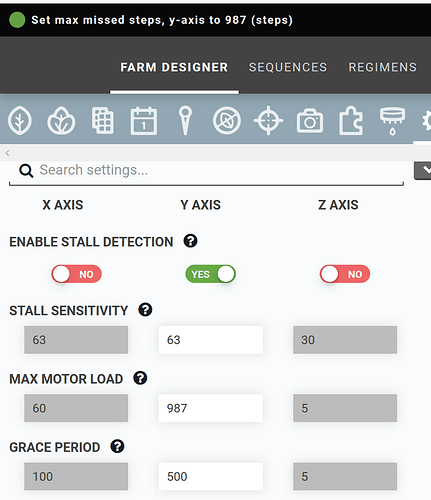 I will CC @roryaronson and @Gabriel as I was not directly involved with the development of this feature.

Do you have meaningful input for us?

Ah, thanks for bringing this up. This is an oversight on our part. Under the hood MAX MOTOR LOAD (for Express bots) is using the same parameter number as MAX MISSED STEPS (for Genesis bots). We’re going to need to add some new parameters to properly distinguish the logs. In the meantime, you can rest assured that the firmware is receiving the value it is supposed to receive.