In your July 3rd, 2019 Software Update: FarmBot OS v8 Beta, Variables, and much more you mentioned that you will implement new multiple location variables “All plants” and “All weeds”.

Can you tell me where I can find these variables ? because I can’t find them.

@Arti4ever When we released that update, the software did not yet have the ability to support groups of plants. Our long term goal was to allow users to customize their account by creating “groups” of plants. In July of 2019, that feature was not ready. As a compromise, we offered users the “All Plants” option until the “groups feature” was ready.

The feature mentioned in that announcement feature has now been replaced with “Groups”. You can still execute a sequence that contains “All Plants” by creating a group that contains every plant (there is a “Select All” button).

You can learn how to create plant groups here.

@RickCarlino Thank you for your answer, but this do not resolve my issue for the “all weeds” case, because in “groups”, you cannot add weeds.

Besides, we also can’t create groups for “points”, so scanning the entire (looking for weeds) bed is impossible if we do not have plants every where.
so adding groups functionality to “points” and “weeds” could be great.

And I think it would be very usefull to have an “automatic variable” for weeds in order to make weeds detections and killing fully automatic.
because for now, killing weeds with farmbot is very unusefull and time consuming.

@arti4ever If I am understanding your feature request correctly, the “automatic variable” feature is already underway. I agree that the current Groups feature is still missing a few things, and I think the next release of groups will address your concerns. We’re almost done with an update to the Groups feature that will include a “criteria” feature where you can apply a filter to all plants and dynamically update a group’s content based on search matches. It will allow you to set arbitrary criteria such as “All points where type is ___”, “All plants within box X/Y/Z”, “All plants tagged as a weed”, etc… This feature is nearly complete and we are in the process of doing final QA on it before it is released.

can’t create groups for “points” … adding groups functionality to “points” and “weeds” could be great.

If I am understanding correctly, this will be possible with the next release of Groups. As mentioned, this feature is nearly complete and is undergoing internal quality testing. I have included some screenshots of the release we are testing to give you an idea of how it will look.

I’ve attached some screenshots of the feature as it is currrently being tested. We will announce the release soon on our newsletter.

Creating a zone of plants within a box: 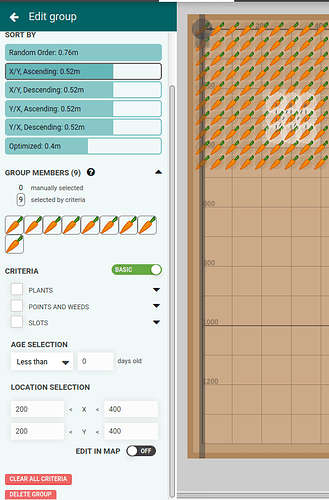 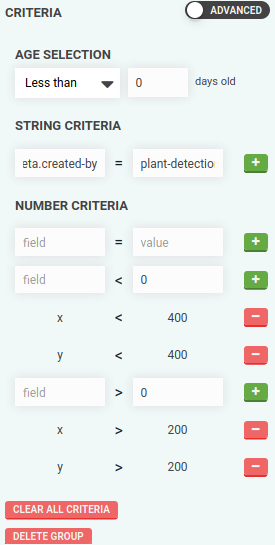 Filtering by type of points: 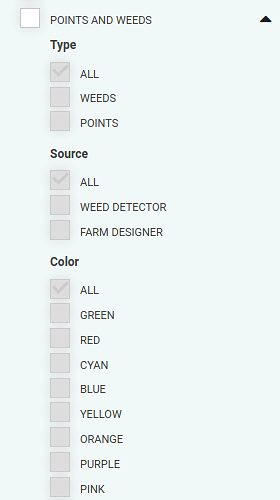 @RickCarlino This looks awesome ! even better than I thought.
Thank you for your work.
Can’t wait of using theses features.