This week we deployed a new version of the FarmBot Web App and FarmBot OS. But before we get into that, check out our newest FarmBot Story.

FarmBot Digital Twin showcases a student project in Australia that produced a 3D simulation of a real garden using photogrammetry techniques. This project was a collaboration between Maxiem and Western Sydney University with assistance from FarmBot Inc. Watch now: 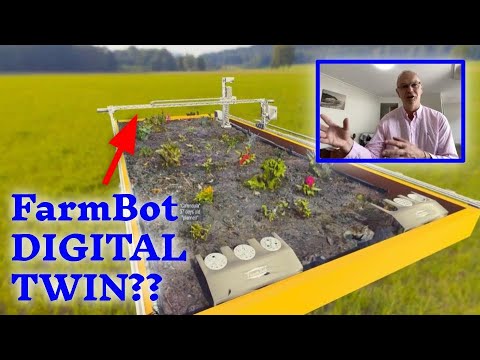 You can now bulk edit the properties of plants, points, and weeds from the multi-select panel. Simply select which objects you would like to update, and then open up the “More” dropdown under SELECTION ACTIONS to view the bulk update options. Depending on the object type, you can bulk update radius, color, status, start date, and crop type. 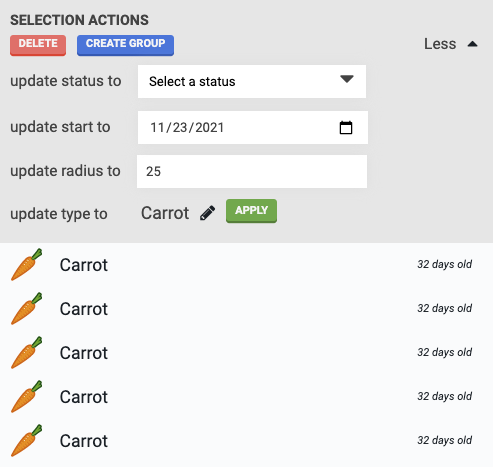 You’ll now find FarmBot’s current coordinates displayed in the main navbar of the app, right next to the connectivity popup. This allows you to keep an eye on what FarmBot is doing from any panel in the app.

To make room for this addition, the synced/syncing indication has been merged into the connectivity icon. Now, whenever FarmBot is syncing, the icon will display as a spinning loader. Once synced, it will go back to the checkmark.

As previously announced, we have published a new public sequence that takes a grid of photos of your whole garden in just one step. To use the sequence, open up the share link (https://my.farm.bot/app/shared/sequence/9) and click IMPORT. Then schedule the imported sequence in an event, or run it via the EXECUTE command from a larger parent sequence. 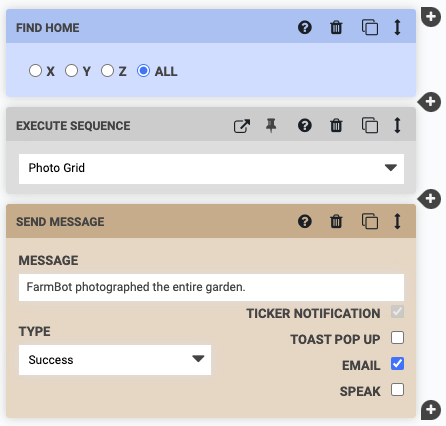 Going forward we plan to create many more public sequences like this one enabling advanced FarmBot operations in a single step, as well as a panel in the app for you to browse and discover these shared sequences.