Recently, I started to have a lot of problems with Farm Designer freezing on me. This happens on several different devices (PCs and android - Wifi / LAN).

Not sure what do to?

problems with Farm Designer freezing on me

Hi @ClosedCircuit been Ok for me in Southern Hemisphere ( not a power user by any measurement ).
Is it always|often the Sequences topic that “freezes” ?

Yes - good point. It always seems to be when I am editing or trying to run a sequence.

Hmm thanks for bringing this up. Are you editing a particularly large sequence? (Many steps)? Do you have a lot of point/weed/plant objects in your garden?

Hi @roryaronson, Just checking if the info shared last week helped or if you need anything else?

I have been having the same issues. I have not been able to run ANYTHING from the web apps on any devices (I have only Apple devices) for about a week.

@ClosedCircuit I took a look at your account to investigate further, and I’ve recreated roughly the same resources you have with a test account. I am noticing the browser slow down when I add many steps to a sequence that use groups with a lot of plants in them. We will continue investigating the issue further.

In the meantime, you and @dinerbabe may try breaking up a problematic large sequence into several smaller subsequences.

Just to confirm my understanding: At the moment, I have a master sequence that calls a series of other sequences (subroutines). Each subroutine comprises one of two watering sequences (water for 1 second or water for 6 seconds).

This allows me to do three things: 1. optimize travel path, 2. select different watering lengths of time depending on which group of plant is being watered and 3. re-use the same two sub-sequences over and over again.

Is your suggestion that I should create one (short) sequence per group and have that new sequence point to the next? 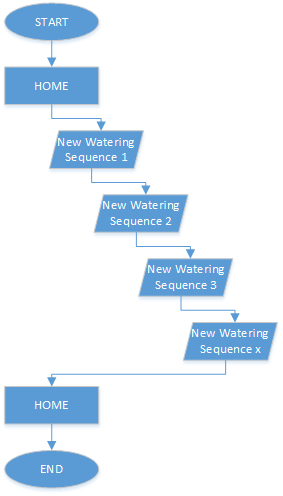 This looks more complex to manage.

I have been toying with the idea of learning LUA. Would this help solve my issue? As an aside, what would be super useful is if your team could produce a 30-45min video tutorial explaining the basics of LUA programming in the context of Farmbot. I know that you are all very busy but this stepping stone would be a great way to quickly expand your users’ knowledge. Just a suggestion…

I took your suggestion and simplified the sequence to just one command for all of my plants (after altering the group). It did the trick! Not sure why it was suddenly an issue when it has been working well for me for months, but glad to have it fixed. Thank you!

@ClosedCircuit before you go changing your sequence, can you give the app a try again today? @Gabriel just deployed some changes that will hopefully solve the problem.

) to show the total number of members in a group wherever groups are listed as an option in dropdown menus. The listings changed from All Plants to All Plants (289).

Thanks to you and @dinerbabe letting us know about the problem, we identified that the web browser was re-calculating the number of members in every group for every sequence command that needed to list groups in a dropdown menu, every time there was a change to the sequence (adding a command, etc). The problem would compound and become very noticeable if:

The app now caches the result of these calculations so it doesn’t repeat the math every time the sequence changes. Let us know if this has fixed the problem!

The problem has been fixed and the app is very responsive again. Well done and thank you and your team for the quick turnaround!

I am also very grateful to @jsimmonds for having identified that the problem was linked to the Sequence topic in the first instance.

All set here too! I thought it was odd that the issue started as the web app was updated. Thanks for the quick response. Will be away next week so our Farmbot (R2Feed2) will be on its own!