Currently, it seems impossible to reliably schedule multiple Farm Events at the same time and expect all of them to execute. This seems counter to the vision of FarmBot, which is primarily making growing your own food using automation accessible to everyone.

Regimens are designed to specify how the FarmBot cares for a particular plant type. Regimens don’t care if it’s winter or summer, they care about what “Day 1” and “Day 12” etc. look like for a given plant type.

Imagine you are preparing your FarmBot to handle many different types of plants, some of which you’ll plant during winter, some you’ll plant in spring, and some in summer. Some plants you might grow all year 'round, or repeatedly every season.

You’d make a Regimen for that plant type and specify day-to-day how to grow that plant from a seed to harvest. And you’d do this for (say for the sake of this example) 25 plant types, 25 Regimens.

In the current Farm Event scheduling mechanism, you’d have to manually ensure that the start times of your sequences inside each Regimen do not conflict with the start times of sequences inside other Regimens. That is, in my opinion, an unreasonable expectation. I would like to propose a conceptual solution that I believe would be possible with FarmBot, although potentially requiring some significant refactoring of the existing scheduling logic.

The Queue is a list of tasks that is kept separately of all other current scheduling mechanisms. It becomes the primary source for FarmBot to periodically check if it needs to perform a task. Tasks are added by Farm Events and by the user requesting to run sequences ad hoc. The Queue does NOT have a concept of time, it simply exists to hold tasks and its goal is to be empty.

These are all good points, @mdingena.

Quick disclaimer: Before I address this proposal, it’s important to remind anyone reading this thread that there are only two software developers on staff at FarmBot, and we’re still independently owned and operated (compare this to the company size of any other IoT product in your home). Sometimes when feature development moves slowly, people may conclude that we’re refusing to develop certain features. Oftentimes, it’s simply a matter of resource allocation. A good example is the criteria-based groups- it was released about a year ago (2020), but it has been on the roadmap since 2014. FarmBot in 2021 is still very much an underdog in the IoT space, and this isn’t necessarily a bad thing. Being small has helped us keep our interests aligned with users. Often this comes at the cost of feature development that is slower than anyone would hope for. I thank everyone in the community for their patience as we improve the product.

OK, now for a real response…

Concerning your “queues” idea - we are heavily considering this option. We haven’t written too much on this publicly, but we’ve spent hours/days discussing it, and it is probably the solution we are going to have moving forward. It won’t be exactly like the solution you are proposing, but it will be conceptually similar.

We have plans to overhaul the farm event system, including a “task manager” GUI that offers facilities to manage past and upcoming events. We’re also considering moving event scheduling into the API, allowing for more consistent scheduling and the ability to have “watchdog” alerts when events do not execute as expected. Example: Your bot can’t report a failure if it crashes or experiences SD card corruption currently, but this is very simple to do if the API is partially involved with task supervision.

With regards to regimens, you are absolutely right that they need some updates. There have been two factors that have kept us from allocating many resources to a Regimen system update. When we analyze real-world data of long-running devices, we find that most users are not using the Regimen system. Regimens are very popular with power users, but statistically, the average user prefers to use FarmEvents. Additionally, If you couple farm events with criteria-based point groups, it is possible to accomplish many of the same goals as regimens, at least in the interim, until more time is devoted to a Regimen overhaul.

I hope this answers your questions. Thanks for sharing your ideas with us!

Thanks for your detailed response.

we find that most users are not using the Regimen system

Have you considered users aren’t using Regimens because without a rework, they offer little value? As a power user, I find they offer me little because they do not fully work as intended.

This fact, in combination with the scheduling mechanism, makes it so Regimens are not useful to me currently. So I will likely stop using regimens which only strengthens your belief they are not useful.

But you are wrong (respectfully). I think Regimens and Farm Events are probably the two killer features of FarmBot and users must be educated on their use. Give users some radish seeds with their kits and instruct them to grow staggered groups of radishes. They’ll quickly understand why regimens are so great.

But, one more thing that needs to be fixed is being able to specify which subsequences should loop and which shouldn’t (see Nested sequences and Plant Groups), because currently my bot is mounting and unmounting the watering nozzle for every single radish and there is no way around that at the moment!

@mdingena I do agree that we are in a chicken-and-egg scenario with Regimens. With regards to the thread you’ve linked to, I’ve provided a response to your original post in the link, and hopefully, it gives you a better idea of how things work.

The problem that arises is that they all use the same time-of-day to perform their tasks.

To confirm, I have stopped using Regimens because of

this problem and switched to manually scheduling Farm Events with a guestimated time gap of 5 minutes between each event. 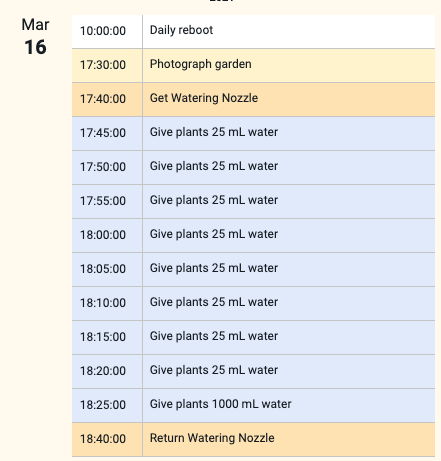 I hate it… I can’t even see for which plants the sequences are (Regimens showed you the Sequence name and below it, it showed which Regimen put that Sequence there).

Please considering giving Regimens the love they deserve. I know your resources are stretched really thin but Regimens are fundamental to FarmBot operation.