Here's an update of what we've been up to the last few months and where we're heading:

The vast majority of our software development efforts since October have been to build out the much-anticipated variables feature. As previously mentioned, this has been a huge undertaking for us and represents the most substantial changes to the FarmBot software ever. We're putting a lot of thought into how this feature is designed and built so that the experience is highly versatile and easy-to-use. The majority of the implementation is now complete, and we're transitioning through the heavy build phase into wrapping up loose ends, tackling edge cases, quality assurance testing, and design tweaks.

In addition to the variables feature, the upcoming FarmBot OS v8 release will include a vastly improved implementation of farmware, our 3rd party plugin system. Farmware up to this point has been in an alpha state, and admittidely a bit of a hack job. With v8, we will bring farmware out of alpha with much more robust infrastructure for it moving forward. Please see this post for more information.

We've migrated our OTA (over-the-air) update system for FarmBot OS to the open-source NervesHub project. This gives us greater flexibility and control in managing and updating devices, particularly for development purposes. It also features a push architecture so devices receive updates in a matter of minutes after publishing rather than the daily pull architecture from before. Releases will still be syndicated on GitHub for self-hosted users and for initial download of .img files.

Configurator has received some updates including:

With the release of FarmBot OS v7.0.0, FarmBot now supports enterprise WiFi networks (WPA-EAP)! Big thanks to @rob.niedermeyer for helping us with logs and testing of this feature.

FarmBot OS will now create a sensor reading and attempt to upload it to the web app whenever it reads a pin that has been registered as a sensor. A new Sensor History widget on the Controls page can be used to view and filter your sensor readings based on sensor, time period, and location. 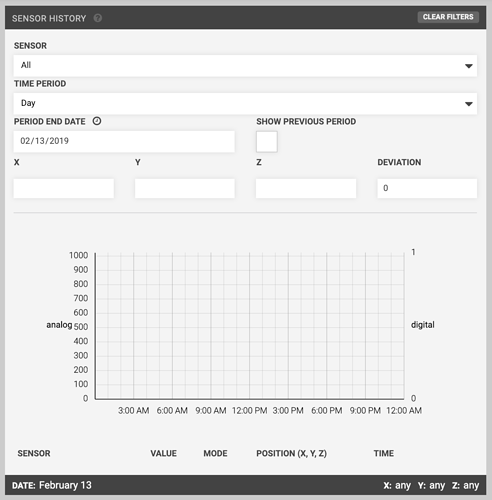 Note: if the bot is disconnected from the web app at the time of reading the pin, the reading will not be uploaded, so this feature is currently best used with bots that are usually connected.

The firmware received updates to:

For the developers and self-hosters out there, we just finished up the switch from webpack to parcel, which fixed build issues some people were having. Thank you @derletztename, @I_Kill_Plants, and @nicolas for the help and patience with this transition.

We've written up an official software support policy that is designed to encourage everyone to keep their bots and self-hosted solutions up to date. This will help us focus more of our time on moving forward with the development of new features, rather than supporting legacy systems.

We're continuing development of a new FarmBot product line slated for release this year. As mentioned before, this will be a big leap towards our vision of "FarmBot as a home appliance". It will be faster and easier to set up, more affordable, and feature some great hardware improvements - many of which we plan to bring to the Genesis lineup with v1.5.

How we do business

If you've been subscribed to our email newsletter, you'll know that in December we launched a new documentation hub: meta.farm.bot. This is our committment to openly sharing our business, and it is something I'm personally quite excited about. We've already seen some early positive feedback, and a talk I gave at Linux Conf Australia last month about these documentation efforts was also well received.

After the conference last month, I've been doing a lot of reading on the history of the free (as in freedom) software movement, and how it relates to (and differs from) open-source. This has inspired me to document how FarmBot Inc respects your freedom as a user of this technology. I look forward to incorporating more of this message and philosophy into our marketing and community building efforts, as well as into the DNA of the company.

We changed around the main navigational links in the documentation hubs so that all four of them feel more connected: hardware, software, developer, and business. We hope this helps more people find and explore all aspects of our open-source offering.

Last time I wrote a big progress update, I had two business announcements that were both supposed to be announced in December. One did get announced, and that was meta.farm.bot. The second one though got delayed, but is now finally ready:

We're now offering our customers a financing option to pay for a FarmBot over time with Affirm. This is an important step in making FarmBot technology more accessible to the masses. It allows people who couldn't otherwise afford the large up-front cost to get a device today and start realizing the benefits and potential cost savings of FarmBot sooner rather than later. We look forward to seeing how this opens up opportunity for people.

Alright, that's all for now folks. Thanks for reading

Thanks for this update Rory. Reading through this, made me smile like it always does when something is announced. I already can’t wait to get my bot running again and try all that the team has been working on.
I really appreciate the work that you and the rest of the team does.

I’m going to start fundraising to add a Farmbot 1.5!