Since I installed and configured end stops on the y-axis it has stopped working I just get a motor “click”. Could someone who has successfully configured them to home using the farmbot software help me please.

I did the following…

I installed them on the y-axis and plugged them into the ramps board to the VCC and wired signal following this thread Calibration / End-stops problem and picture (looks like a different RAMPS board???) 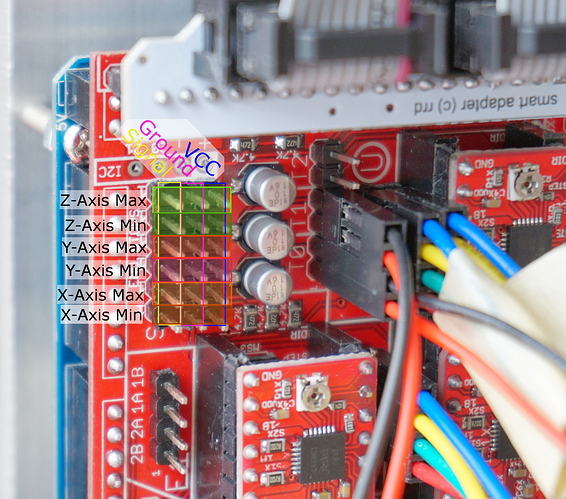 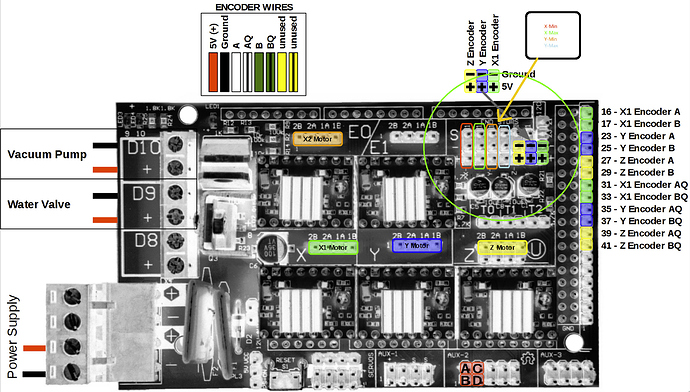 My Encoders and Endstops configuration is: 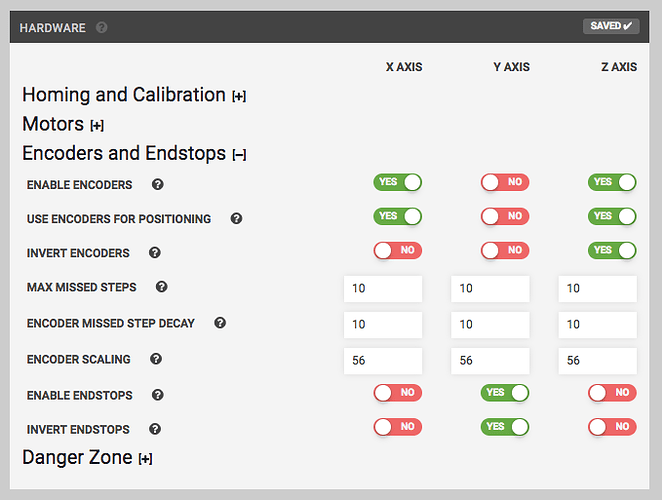 I’m also not getting any log output when I try to move the Y-axis and just get the click by the Controls tab, Home Y or Calibrate Y.

I have tried turning Invert Endstops on and off to no effect.

My Y encoders are still plugged in.

Hey @whitecaps
Sounds like your endstops are not properly connected. Sadly the Link to your bought endstops are not working, so we can’t see how they are working (NC/NO, 2/3 wire?). To me those two pictures show the same connection points at the endstop pin section.

Maybe you could provide a picture of your endstop pins where you plugged the endstop in.

Thanks @Ascend these are the ones I bought + magnets http://nz.element14.com/hamlin/59145-010/proximity-sensor/dp/1653414?ost=59145-010&scope=partnumberlookahead&exaMfpn=true&searchref=searchlookahead&iscrfnonsku=false&ddkey=http%3Aen-NZ%2FElement14_New_Zealand%2Fw%2Fsearch

Here’s the maximum end stop installed on the Y-axis (I need to put some padding behind it to lift it of the rail will do that later). 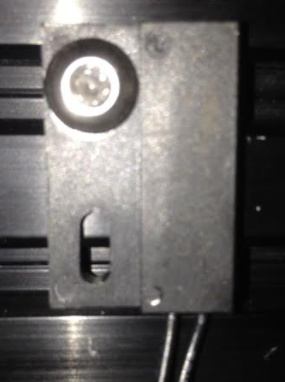 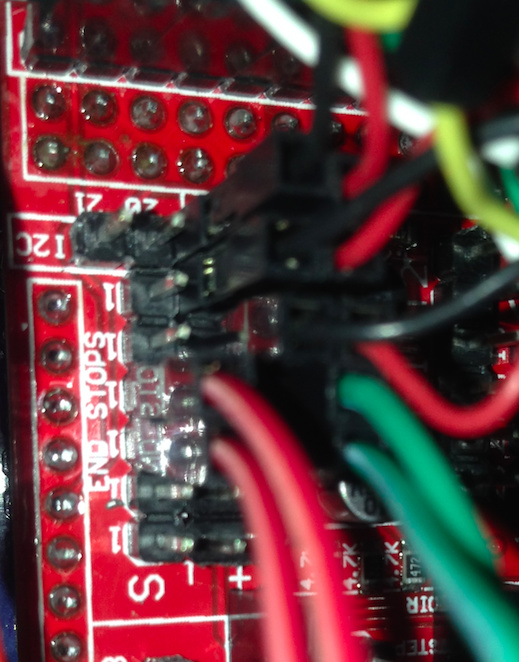 Alright thanks, I think we can see what’s needed. Could you try to plug the green wire into ground, so that we have the endstop between ground and signal.
I’m not entirely sure if this might work for farmbot firmware, but I’m pretty sure that my 3d printers are connected like I described.

I tried that but there’s no change. I can think that either:

@Ascend and @bgmoon what end stops do you guys use, recommend?

To your points:
A): Make sure your endstops are working properly. You can check that if you measure the resistance between the two wires. When the endstop is triggered by the magnet, the resistance should be really low.
B): firmware IS working with this kind of endstops. There are many different things that could prevent your endstops from working.

@bgmoon thanks for coming in. We appreciate your help

@Ascend, @bgmoon thank you for your help.

I checked the resistance for the max and min end stops on the y-axis (plugged into the RAMPS board) with my voltmeter.

With the end stop and the magnet apart its at 1 and then the resistance decreases to 0 as the magnet gets closer.

But still I am just getting a motor “click” and no movement on the y-axis.

Is there anything else I can check?

Did you try to invert the endstop signal?

Yes tried that, is there anything else I could try?

I should be able to debug on the arduino if someone could point me in the right direction i.e. recommended developer setup, how to access logs, what to look for etc.

See this post. You can look for the R81 response.

I have hooked up my mac to the Arduino and run the serial monitor. I tested it by running the command G00 Y100. I did a test I knew would work by configuring the encoders and then configured the end stops and tested again. I hoped to see an obvious difference but I think I need more experienced eyes on the results below. Do they shed any light @Gabriel? Is there anything else I should try?

I would expect movement when the R81 response reads R81 XA0 XB0 YA0 YB0 ZA0 ZB0 Q0. If you have some pin jumpers, can you try connecting signal (S) to ground (-) and send the movement command again? I believe endstops are currently set up for normally closed (NC) operation. INVERT ENDSTOPS currently inverts min and max, so that the min and max endstops are switched, while keeping the values of those endstops the same.

Note I have only configured and installed the Y axis end stops. I plugged in the pin jumpers and now get
R81 XA1 XB1 YA0 YB0 ZA1 ZB1 Q0 which is what I should expect. So does this mean either the end stops are not working or there is a problem with the wiring?

I checked the wiring in a previous post (see below) but now I’m concerned I’m still missing something?
"I checked the resistance for the max and min end stops on the y-axis (plugged into the RAMPS board) with my voltmeter.

With the end stop and the magnet apart its at 1 and then the resistance decreases to 0 as the magnet gets closer."

As always I really appreciate your help!

Two things I have found out which may help.

Hopefully one of those helps resolve the issue?

I realise you guys are busy but could I get some with this pretty please. I’m not sure if the end stops work with the Farmbot so if after reading my previous two posts you agree, could you tell me of some end stops you are absolutely sure work with it?

I really appreciate the help you can given me

Sorry @whitecaps for the delay. I just lost this issue out of sight.

I get movement and R81 XA1 XB1 YA1 YB0 ZA1 ZB1 Q0 however the movement doesn’t stop, the stepper motor keeps going on the Y axis until I remove the magnet from touching the end stop.

So your Y-Axis is running in + direction until you remove the magnet from the endstop? So this sounds like your behavior is just inverted. I think this is caused by using NO switches, and firmware is set up for using NC switches.
INVERT ENDSTOPS function doesn’t seem to help if it only changes between min and max.

I’m using really cheap endstops with NO and NC connections, but they’re connected via NC. Here is a link of mine, shouldn’t be hard to find some in your country: https://www.amazon.de/10-Stück-Mikroschalter-Wechselschalter-polig/dp/B00BXHN0J2/ref=pd_sim_107_2?_encoding=UTF8&psc=1&refRID=KSDHCZEG6SAGZ3YD2SFK