Problems when Quiet Mode is enabled

I thought that the best way to explain would be to list what I did (in bold) and what the result was.

So to conclude, the problem is not systematic but will invariably appear after a short while. I am not sure what to do next and any help would be really appreciated.

Everything works fine when Quiet Mode is disabled.

I have upgraded to 14.3.1 and, so far, it seems to have solved the problems. Fingers crossed!

upgraded to 14.3.1 and, so far, it seems to have solved the problems

What is the Farmduino firmware version displayed now ? 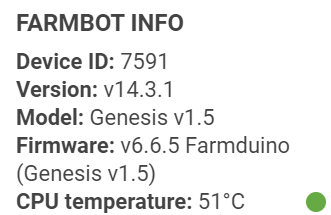 For the first time since Quiet Mode came out, it has just completed a fairly long watering sequence without any problem.

Thanks for the detailed report @ClosedCircuit, and I am glad to hear your system is working now. We are looking into what may have caused the initial issue, which may be the same problem we identified with the FarmBot Express firmware yesterday.

Yesterday we found an issue where movements were not possible and the motors were clicking at about 1.5 Hz (note the clicking is only if ALWAYS POWER MOTORS is enabled, which is the sound of the motors activating and deactivating). The issue only seemed to be affecting FarmBot Express devices, and would only begin after hard power cycling (unplugging the FarmBot and then plugging it back in) with the buggy firmware (v6.6.5) flashed.

We were able to reproduce the issue internally with Express but not Genesis systems, and so we reverted the Express firmware back to v6.6.2 and released it with FBOS v14.3.1, which seems to have solved the issue for the affected Express bots.

It is strange that your device is now working after updating to v14.3.1 because as @jsimmonds pointed out, that release should not be any different for your device than v14.3.0.

It is also strange that you had similar sounding problems in the first place (motor clicking, no movements) with the v6.6.5 arduino firmware included with FBOS v14.3.0, because we are unable to reproduce the problem internally with that firmware version and our Genesis systems. This means there could have been something else at play in your system that presented itself similarly.

Were you by chance running a beta or alpha version of FBOS that had a firmware version greater than 6.6.5? Because of the funny nature of the bug requiring a hard power cycle to present itself (and go away), it seems plausible this is an explanation.

Moving forward, we are able to reproduce the clicking problem with Genesis systems using an experimental firmware (v6.6.9), and it seems to be resolved in v6.6.10.

The my.farm.bot update server currently has these versions of firmware on it:

Many thanks for your reply @roryaronson

The problem started again this morning but your comments may explain why. My FarmBot is connected to a smart plug. There is a scheduled sequence that powers the FarmBot off after its daily watering sequence has been completed. 15 min later, the smart plug turns power off. The following day, the smart plug turns on again 15 min before the watering sequence is due to start. So, there is very much a daily hard power cycle that could explain why 6.6.5 is misbehaving.

I would be happy to test as per your last para but could you please let me know how to flash the alpha and beta versions of the firmware?

I would be happy to test as per your last para but could you please let me know how to flash the alpha and beta versions of the firmware?

Documentation for 3rd-party developers to work with the FarmBot API

Thank you for testing out the beta and alpha versions, and I’m sorry the efforts were not fruitful. We’re still scratching our heads as to whether this is a problem with the firmware, or your specific device. There could be a subtle hardware defect with your electronics board that is causing this bug with your device but no others.

If that does not work, I would be interested in shipping you a replacement electronics board and having you ship yours back to us. If it comes to that, we might also wait until our v1.6 boards are ready and get you a free upgrade package for your help in troubleshooting with us

Many thanks for all the work that goes into trying to understand what’s going on.

To answer your question, I did try 14.2.1 and every version thereafter. You can see in this thread (July 7, 2021 Software Update) some of the discussions that @RickCarlino and I had around this particular issue.

I am keen to progress this and would gladly accept your kind offer to swap boards. 1.6 would be great

Okay, thanks for the info. Let’s stay in touch for when the v1.6 hardware drops! Stay tuned