All of my axes recently started to make a ticking sound, two times a second. No matter what speed and if the belt is connected or loose … coincidentally every time the sound appears, the RX LED on my MKS Gen board turns on for a few milliseconds.

@Klimbim yours still working as expected?

Thanks for all the answers. One more question - did you set jumpers somehow on the board? I have farmduino 1.4…

found this guide for jumper settings:

Check your Farmduino board, there should be a small red box with dip switches next to the stepper drivers. Each switch is labeled with “MS X” which corresponds to the MS1-3 on your guide table.

We had to set jumpers directly below the drivers, which made it necessary to unplug the driver. Your board seems to be much more comfortable

Jepp, mine are still working flawlessly. It was one of the best mods that I could do!

In case anyone needs this as well, sharing a guide how to replace stock drivers with TMC2208.

I haven’t tested them long enough, but they are absolutely quiet, which is cool and that makes a lot of difference

So some good resources to go to: 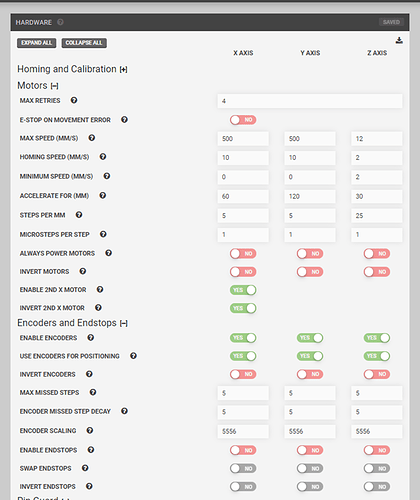 my settings now: (you need to set microstepping properly and invert motors) 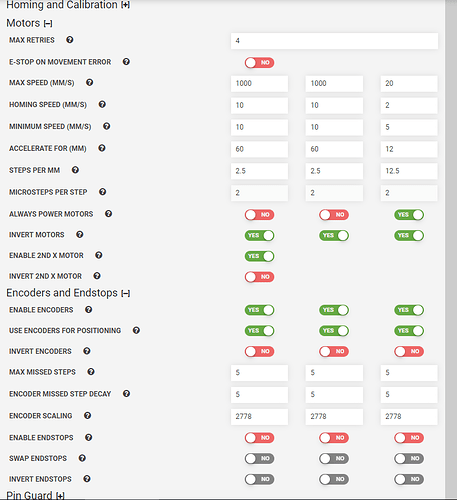 so far so good, although I have some things to test & followup:

Also the voltage is not higher than 1.1 V - not sure if I can set it all the way up to 1.9 V as with the old driver (and if that would create better torque)

1.9 Volts sounds like a dead driver soon. My drivers are set to 0.8 to 1V, can’t even go much higher, because my motors start to stall when its set too high.
My TMC drivers are in duty since december (1/2 stepping) and I havent had any issues yet with overheating or similar and they are not cooled yet. But my electronics box is not in the direct sunlight what could be a big difference.

Does anyone know (is there a tradeoff between torque and microstepping?)

I’ve replaced the drivers on my 1.4 Farmduino and it seems not that there isn’t enough power to move anything. The motors make sounds like they want to move, but do not. Any advise? I’ve measured voltage at the screw and they are at ~1.1v

I had them set too high. all good now

he motors make sounds like they want to move, but do not. Any advise? I’ve measured voltage at the screw and they are at ~1.1v

What voltage did you set them to in order to get them back to work?

I currently have them set to ~.88 volts and they are working really well. Using these drivers, farmbot is fast and quiet. I really like them.

My drivers are set to 0.8 to 1V, can’t even go much higher, because my motors start to stall when its set too high.

@jschneck this behaviour is usually the same when using a4988 drivers.
Glad you still got it

Pictures of the TMC2208 drivers - notice the orientation of the driver on the RAMPS board has the driver potentiometer low, closest to the green power connector.

Heat sinks are to be mounted on the “flat” side, not on the chip - apparently, this a better way to conduct the heat off the chips. A couple of hours of testing and the heat sink for the Z axis never got too hot to touch. The square hole pattern in the center (under the white MC22 and Step ink) is where the heat sink should be mounted. 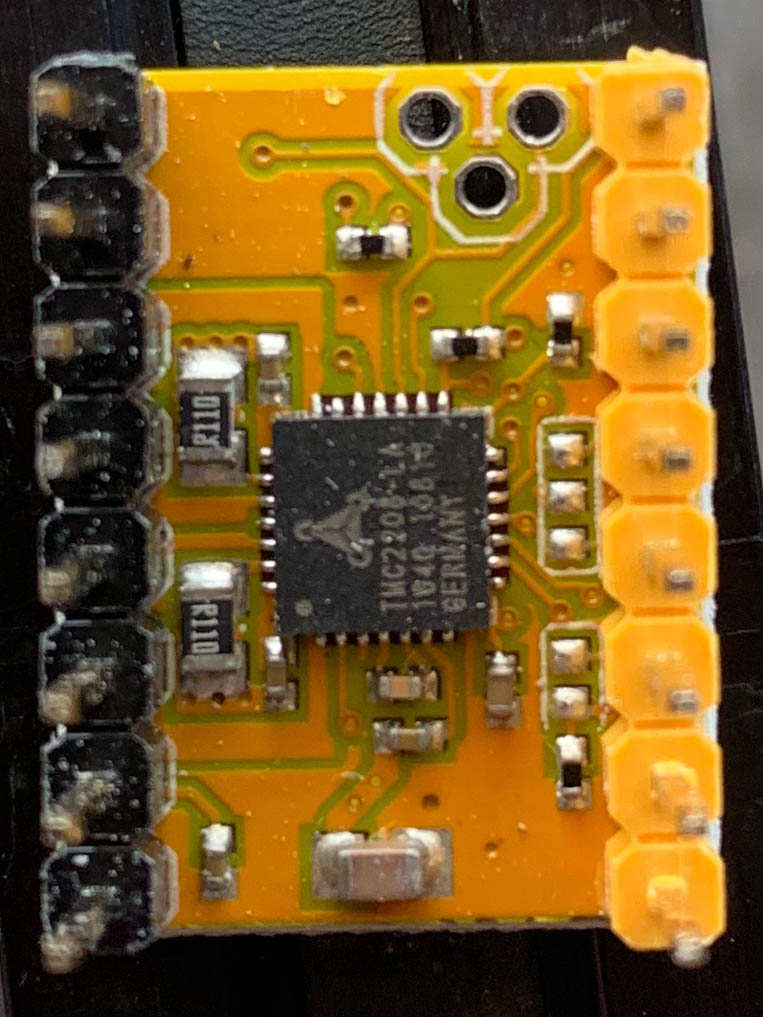 Link to the manufacturer’s page on the chip.

Did anyone have to implement the jumpers under the drivers on the RAMPS board? I struggled with my 2208 drivers all morning. I used EIDE’s settings, but got “CS Failed: [move_absolute] - :firmware_error” almost every move. After putting the A4988’s back on the X axis, I could easily calibrate.

Symptoms with the 2208s are the error above, especially when relatively moving long (1000mm) movements. The stepper moves super slow. I’ve set the driver VREF to .88 and monkeyed with the settings, but really never got the silent drivers to go. Super quiet for the short durations though!

Did anyone have to implement the jumpers under the drivers on the RAMPS board?

Sure, MS1 is set on mine to get the motor running on 1/2 step. If you didn’t set any jumper it is set on 1/8 stepping, as you can see in the table a few posts earlier.

Ok, thx - I read somewhere you didn’t have to jumper them, but that may have been for a software config on the 2208. . . Wanted to be sure as my FarmBot build is in a barn about 30min away. Thanks again. . .cd

Found this pic of the jumpers here: I guess nobody tried to use the TMC2208 drivers in UART mode?
Seems like you need to add a lot of coding in arduino to get them work but it should give more torque to your steppers

Hi All, especially @Klimbim and @Ascend,
last year i successfully installed a TMC2208 stepper driver for my z-axis motor and the result was fantastic! The z-axis moves very silent and smooth now.
AS my Y- and X-axis movements are now louder than the Z-Axis movements, I wnted to do the same thing last week, and I tried to exchange the A4988 by TMC2208, first on the Y-Axis, then for the X-Axis.
Surprisingly the motors on X and Y did not work after the exchange. They only try to move a bit, and then stall. I played around with Vref between 0,8 and 1,6 V, but it didnt change anything.

Does someone has an idea, why it worked so easy for me for the Z-Axis motor but not for the others? I tried several of the TMC’s but none of them worked correctly.
I don’t know what causes this problem or how to figure it out.
Any help is appreciated!
Thanks